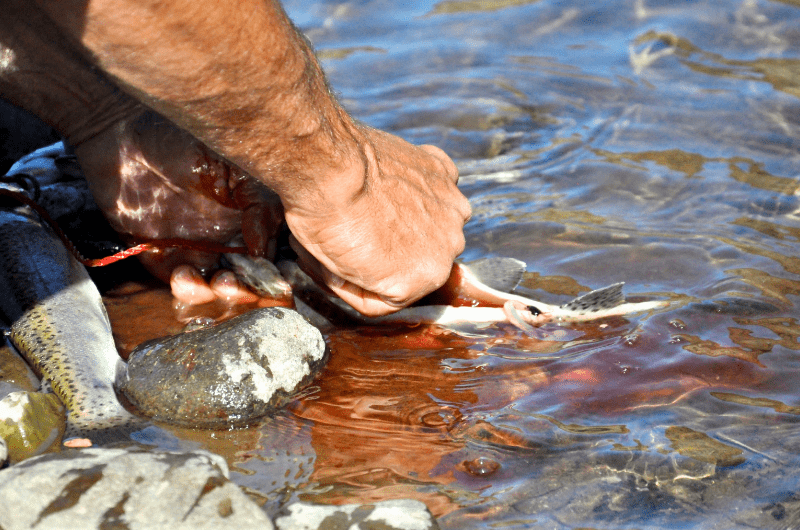 Fishing has been an integral part of humanity’s growth for thousands of years and eating fish has provided sustenance since the beginning of recorded history. We owe a lot to this delicate ecosystem so it’s important to remember that all healthy fish caught for eating must be handled with care and humanely killed.

In this article we explain the three ways to humanely kill a fish for eating: percussive stunning, spiking the brain (ikejimi) or breaking the neck. Read on to learn how to implement either of these methods to kill a fish the cruelty free way.

What does humanely killing actually mean?

Humanely killing is when an animal ‘is either killed instantly or rendered insensible until death ensues, without pain, suffering or distress.’ The first time you try to humanely kill a fish can be daunting, but there are ways to do this without causing additional injury to the animal.

If you love to eat fish you’ve caught yourself, then read on. This article will show you how to humanely kill a fish for eating using three methods and how to avoid inhumane methods. We’ve also included details on how to euthanize an aquarium fish as these methods are completely different.

Three humane ways to kill a fish for eating

There are three types of stunning that can be done by hand: percussive stunning, spiking (also known as ikejime or pithing), and breaking the neck. Post-stunning, the fish must be bled out completely by cutting the gill rakers with a sharp knife, although larger fish may require an arterial cut due to their size.

Percussive stunning with a blunt instrument

Percussive stunning is when you knock the fish unconscious with a blunt instrument to the head. This should be done while the fish is still submerged in water (see here on how to handle fish). The amount of force depends on the size of the fish and larger fish will require a greater impact than small fish.

The correct spot to perform percussive stunning on a fish is the space just above the eyes as this directly impacts the brain. Accuracy is important here – incorrectly stunning the fish means it could remain conscious and could cause further distress and suffering. If the fish is still conscious after the first blow, another strike to the head with a blunt instrument should be applied.

Fishing priests (small wooden bats) are one humane way to do this and are easy to use.

Use a sharp spike or ikejime

Also known as pitching, this technique involves driving a sharp spike directly into the fish’s brain. The process of ikejime involves using a sharp spike to stab the brain and severing the spinal cord immediately after being caught. This stops the muscles from moving and producing lactic acids that can affect the taste and texture of the meat.

An ice pick or sharp screwdriver will also do the job. To render the fish unconscious, position the sharp spike above the fish’s brain and push firmly through the skull. Move the spike from side to side to destroy the brain instantly. This is a commonly used method that works with most fish species.

This technique is suitable for small fish with large mouths as you need to be able to get your thumb into the fish’s mouth. It is also a commonly used method for when you don’t have all the tools available to hand. To kill a fish by breaking the neck, position your forefinger and middle finger in the gills, put your thumb on the roof of the fish’s mouth and pull the head back in one strong motion. This will sever the spinal cord and result in a quick and humane kill.

How to Euthanize an Aquarium Fish the Humane Way

There are two simple methods to euthanize an aquarium fish, both endorsed by animal cruelty prevention agency the RSPCA.

The first is to put sufficient concentration of a anaesthetic in the water. This has to be done in conjunction with a veterinarian as these drugs aren’t sold over the counter.

The other way, if you don’t have access to a veterinarian, is to put some clove oil in the water. Clove oil is a sedative that can be bought from a drug store or pharmacy. Put a dash (0.5ml or so) for each litre of water in their tank and the fish will quickly lose consciousness and die of hypoxia (lack of oxygen).

Yes, fish can feel pain. Over the years, research from different scientific communities has concluded that fish are sentient beings that can feel pain in as much the same way we do. It is essential that fish caught for eating are humanely killed to avoid anything that will cause the fish pain or injury.

Why should we learn how to humanely kill a fish?

It’s really our moral obligation to learn how to humanely kill a fish. But it’s not just limited to recreational fishing – commercial fisheries and fish farms must also use humane ways to help reduce the suffering of these creatures as they deal with larger numbers which can affect the welfare of the animals. More often than not, the most humane way is not only faster than inhumane methods, but it also shows that you respect the animal enough to limit any suffering.
The best way to kill a fish for eating is to remember the basic rules:
1. Always use a humane method and kill the fish immediately after being caught
2. Reduce or limit the amount of fish you catch and fish catch and release

What are the inhumane methods of killing a fish?

Many people think that leaving a fish on the shore is a more humane method than physically killing it. But killing fish by leaving them to suffocate can take quite a few minutes and needlessly causes more suffering and distress to a healthy fish.

Other inhumane methods for killing fish – what to avoid:

Freezing with ice, carbon dioxide, or a combination of the two in holding water
• Submersing in salt or ammonia
• Bleeding without stunning
If in doubt, ask someone with fishing experience for advice. A good fisherman or woman should be aware of and will use a humane method to stun and kill a fish and can show you how to do it properly.

What about really large fish?

You can still humanely kill larger fish using percussive stunning to the brain, though the force required will depend on the size of the fish. Breaking the neck is not recommended for larger fish as it is difficult to do, and particularly aggressive fish may fight back and cause injury to themselves or you. Spiking the brain with a sharp spike or the ikejime technique is still one of the best methods to kill larger fish as it offers instant paralysis when done correctly.

The rising popularity of veganism and increased interest in climate change and eco-activism have shed new light on our overfishing of certain fish species. Questions have also been raised as to whether killing any living creature can be considered humane and pain-free. Yet eating fish is still how many populations around the world survive. This precarious balance means it’s more important than ever to catch and kill fish responsibly. This can be done by killing fish caught for eating in the most humane way possible.