Do Trout Have Teeth? And How To Handle a Hooked Trout 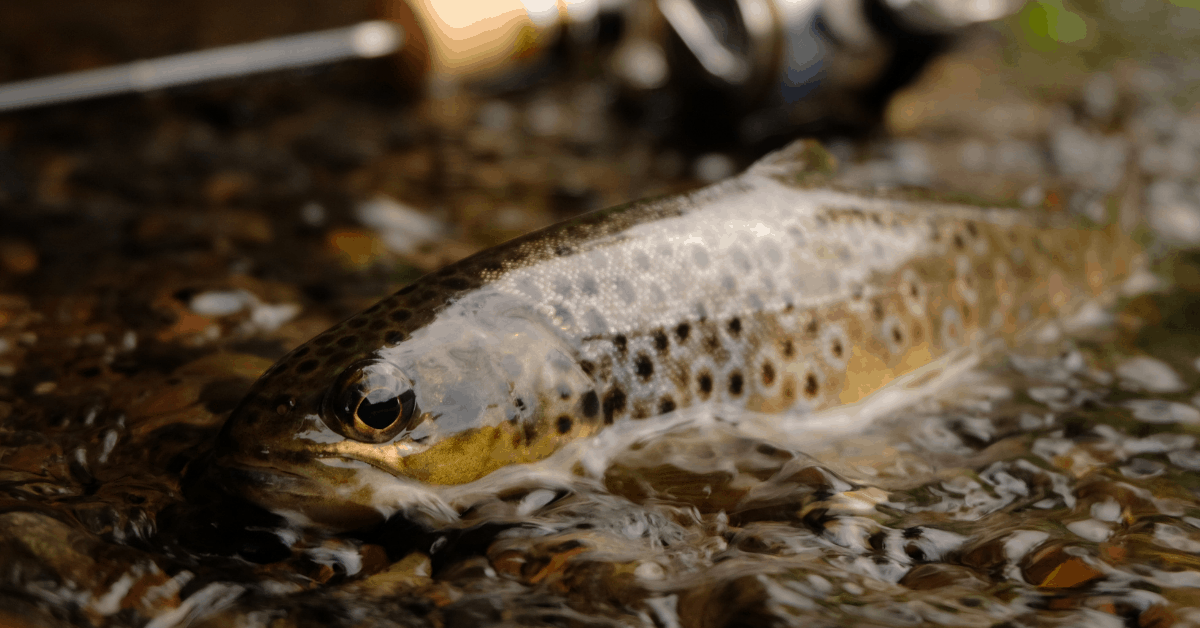 If you are an angler, chances are you have dreamed of hooking a nice rainbow or brownie on a dry fly or nymph. To answer the question simply, yes, trout do have teeth. As carnivores, trout need teeth to help them capture and swallow the smaller fish that make up their diet.

Trout do Have Teeth

Unlike catfish, which have rows of microscopic teeth that resemble course sandpaper, or bluefish which have a single row of jagged, sharp teeth, trout have a few different kinds of teeth. Trout teeth along their upper jaw and bottom jaw are small and pointy for catching prey. Further back in the fish’s mouth, a trout’s teeth are larger and flat. These almost human-like incisors are called vomerine teeth, and they help the trout hold and swallow small fish and insects.

What Do Trout Eat?

Trout eat living things. Depending on the environment where they grew up, smaller trout might feed on insects such as mayflies and dragonflies or zooplankton in the water, like water mites, tadpoles, or newly hatched fish larvae. Larger trout will typically eat larger prey, including larger insects, small frogs, and small fish. As the fish grows, he will need more calories to sustain his growth, so larger meals become necessary.

Some common food sources include:

Do all trout species have similar teeth?

All trout have teeth, but there are some differences among the species. Rainbow trout have rows of tiny sharp teeth along their jawline and vomerine teeth in the roof of their mouth. Brown, or cutthroat, trout have teeth along their gills and at the base of their tongue. Lake trout, which are actually members of the salmon family, have a row of dagger sharp teeth on their upper and lower jawline. Spotted seatrout, which are not trout at all, have two vampire like fangs at the front of their mouth. Spotted sea trout, in actuality, are members of the drum family along with redfish. These saltwater fish are often called sea trout because they resemble brook trout.

Can Trout Teeth Hurt You?

Catching a trout is a lot of fun, but you can’t just lip it like you can a bass or crappie. Even though the front teeth of rainbow and brown trout are smaller teeth than many species have, they are extremely sharp and capable of drawing blood easily. While not life threatening, you do need to be careful before you stick your finger in the mouth of a trout. Any human’s first instinct is to pull their finger back if something is trying to bite it. This is a defense mechanism that automatically happens.

It is not a good idea to yank your finger out of the mouth of a trout, or any other fish with teeth. These small teeth are angled back toward the gills of the fish. This allows the trout to bite down on his prey and secure it between his strong jaws. The prey cannot escape between the teeth because of the angle of the teeth. On small prey, or tender human skin, this row of teeth makes it hard to escape. Once bitten, the chance of survival is very low as the prey is forced further back toward the throat.

As if this one row of teeth is not dangerous enough, remember that trout have two rows of teeth in the mouth. The first row allows the trout to catch the prey. The vomerine teeth located near the back of the mouth guide the prey further into the mouth and down the throat.

So, yes, trout teeth can hurt you, but if you carefully release your catch and keep your fingers out of his mouth, you shouldn’t go home with a blood covered finger.

How to Unhook a Trout?

Trout are explosive when they are feeding. This species doesn’t waste any time when they see something they want to eat. When they are in a feeding frenzy, the water can boil with activity. They easily bite aggressively, and you need to be ready to reel one in.

The trout’s mouth is strong enough to withstand a hook, but you should never let the fish play with the bait long enough to swallow it. This will cause the hook to get lodged in the trout’s throat or guts, and any attempt to remove it will kill the fish.

So, how do you unhook a trout? You will need a good pair of needle nose fishing pliers. You want to try to leave the trout in the water, in the net. Without squeezing the fish, you want to turn him onto his side or back, so the hook is easy to reach. Grab the hook with the pliers and gently remove it from the trout’s mouth.

Why do you need to handle trout carefully? One of the first rules you learn when trout fishing is to use a barbless hook and a net . Have you ever wondered why? Well, most trout species are delicate compared to other game fish. Their gills can be easily harmed and their fins damaged by rough handling.

To correctly handle a trout, turn it upside down or head down. For some reason, this helps calm the fish. Once it is calm, support the weight of the fish’s body by cradling it from underneath. Place one hand just behind the gills and the other hand near the tail. Avoid squeezing the fish, because they are very boney and you could easily puncture its air bladder or heart. Even if you don’t see bruising or blood, internal damage may occur if you are not careful handling the fish.

Different fish will react differently to being caught, also. Brook trout are going to continue to flip and flop in the net in an attempt to free themselves from the hook. Brown trout seem to give up the fight more quickly and calm right down. Most trout species will do well with catch and release, as long as you are careful unhooking and holding the fish.  Try to hold the fish as close to the river as possible, and keep your fingers out of the gills. Of course, you want to take a photograph with that large trout, who wouldn’t? After you document your catch, release it and allow the fish to grow. Trout grow at about one half inch per month, so even though your fish is long, it may still be a juvenile that has not spawned. Keep that in mind as you handle the trout.

Can Trout Bite Through Fishing Line?

Are trout teeth sharp enough to bite through fishing line? No. Even though trout’s teeth are sharp, they are spaced far enough apart that there is no chance of the fish clamping down on the line enough to break it. The teeth trout do have are small and jagged, like the teeth of a saw blade.

Trout fishing is fun, but it can get expensive when you start adding up the cost of different lures, so people wonder if the different teeth fish have can damage lures? Actually, no, not really. Fish grab and gulp their prey from the surface of the river or as it swims in the water. Since most lures are made of strong, durable material, the likelihood of a rainbow trout or cutthroat trout destroying its lure is not a concern. The only exception to this might be some damage to feathers or boa attached to some flies, but it would take a large trout to do that.

Trout, like many other game fish have teeth on their lower and upper jaw. The teeth are small and jagged and angled back toward the throat. Where trout differ from most species because they have a double row of teeth. The second row has just a few teeth located on the roof of the mouth. These vomerine teeth help the trout swallow the food after they catch it between their front teeth.

If you decide to go fishing for trout, remember that these teeth can draw blood if you happen to stick your finger in the fish’s mouth. Instead, use a pair of needle nose fishing pliers to remove the hook. Always try to leave the caught fish in the river or lake, allowing it to rest in the net while you free it. Be gentle when handling the trout so you don’t damage the fish.