Crappie Vs Bluegill: What Is The Difference Between Them? 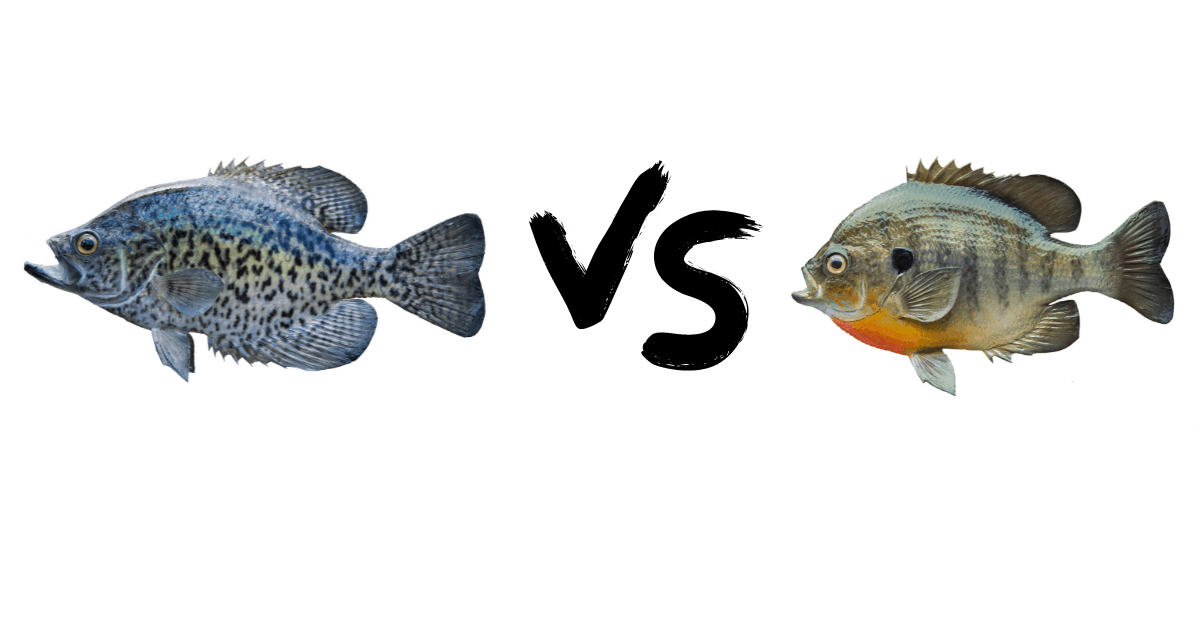 Crappie Vs Bluegill: What Is The Difference Between Them?

Bluegill and Crappie are two of the most highly desired freshwater fish. If you ever went on a fishing trip as a kid, you probably caught one of these small fish. In this article we are going to tell you about the differences between the two and some of the features of each species from a fishing point of view.

Crappie and bluegill are both variants of the sunfish species. This biological species, known as Centrarchidae, includes bass, bream, perch, walleye, and other sunfish genuses. True sunfish in this family include redear sunfish, longear sunfish, pumpkin or spotted sunfish, and green sunfish. The mola mola, commonly called the ocean sunfish, is a different species and not related to the Centrarchidae family.

Bluegill and Crappie can both be found in the 48 contiguous United States, plus some parts of Canada and northern Mexico. They live in freshwater locations with an abundance of cover and food for them to eat. Florida, Texas, Mississippi, and Alabama are known for their abundant population of bluegills and crappies. Some believe it is because these states do not experience the temperature difference some other states do. Because they prefer the same habitat, the two fish can live side by side in the same water body, along with other species of panfish. Two record bluegill were caught in Texas and Alabama. Each was a much larger fish than the typical bluegill.

Bluegill are generally rounder than crappie and appear to have thick bulging sides. Crappie tend to be more football shaped with a longer, leaner silhouette. Both fish have similar tail shape and pectoral fins. The dorsal fin on the crappie is more angular with shorter spines in front and longer spines to the rear before rounding into a circular shape. Bluegill have short, spiky dorsal fins that are almost exactly the same height from front to back.

Coloration and markings of crappie and bluegill

When we think of bluegill, we generally think of the traditional redbreast sunfish with the dark spot on its gill. The male bluegill will have brighter colors and may have an orange or yellow breast and a green body with dark spots. The female is more of a greenish blue with vertical bands of color.

Crappie are a grayish green color and may have slight color variations depending on the type of fish. Black crappie have dark rows of spots covering their mostly gray body. White crappie are almost silver with vertical bars of broken gray lines. For this reason, white crappie were also called white perch for a long time.

Other sunfish have different colorings and markings. The orangespotted sunfish, for example, is bluish green with orange spots all over its body. The copper nose sunfish is mostly greenish black except for a coppery colored band just above its eyes.

While both fish are small compared to a largemouth bass or walleye, the crappie is considerably larger than the bluegill when placed side by side. Most adult bluegills weigh less than two pounds, while crappie can tip the scales at more than five pounds. Bluegill tend to grow rounder, rather than longer as they mature. Crappie not only fill out, but they become longer as they grow. A full size bluegill may only be six inches long, but a large crappie can be ten inches or more.

The mouth of the crappie is larger and more paper lipped than the small bluegill. The crappie also has more of a jutting lower jaw than the bluegill, whose upper jaw and lower jaw are more aligned and present more of a kiss shape when looking at the face of the fish. The small mouths of the bluegill are better suited to their diet of algae, insect larvae, and tiny minnows.

Crappie and bluegill are popular fish for anglers. Not only are they fun to catch, but they live in nearly every freshwater river, pond, or lake in the United States. All members of the sunfish family like to hide in cover, such as weeds and grasses, fallen tree branches, and under docks. Their depth will vary depending on the weather, but like most fish species, they prefer to be out of direct sunlight and hot temperatures. During the summer months, they will go deeper into rivers and lakes, where the water is cooler.

Bluegill like to hide in cover and weeds. They will stay in the shallow waters after the spawning season and move to deeper water when the weather gets hotter. To fish for bluegill, you need very little equipment.

Start out fishing shallow, about 12”-18” below the bobber. If you are catching lots of little fish, raise the bobber 6” at a time until you find the larger fish. The fish will be in areas where frog eggs, algae, and insect larvae are plentiful. Start out on the edge of weed beds or in downed treetops.

Bluegill are light biters, meaning they will bump the hook to get the bait, then swim off. Using a bobber lets you know when the fish strikes, plus it gives little kids something to look at while they wait for a bite.

Crappie have large mouths like bass. They feed on smaller fish, rather than algae and eggs. The most popular way to catch crappie is with live bait, although a range of lures work well for crappie. Minnows suspended in stumps and fallen debris usually hold crappie.

If you see downed trees, rocky debris, or standing reeds, you are in the right spot. Tree stumps that are submerged can also be good holding places for crappie. And if you own a dock it is well worth adding some downed trees to the water underneath to create a good environment to attracted crappie.

Secure the minnow onto the hook by impaling it through its back, just below the dorsal fin. Don’t go too far down or you will rupture the internal organs and kill the minnow. You want it alive.

Drop the line straight down if possible, or flip it into position. Don’t use a forceful cast because your minnow can rip off of the hook.

Depending on the water temperature, start shallow and go deeper if you need to. Crappie feed vertically, so they look up and grab the bait. You will need to suspend the minnow above the fish so they reach up and take it.

Crappies gulp their food, so you need to be quick to set the hook. Watch the bobber for signs of movement. You might also want to place a finger under the line just above your reel so you can feel any tension develop.

Final thoughts on the difference between crappie and bluegill

There is a great deal of similarity between these members of the sunfish family. They prefer to live in freshwater ponds or rivers where aquatic insects and smaller fish are abundant. They both have tender, white, sweet meat that is excellent to eat. Fishing for both crappie and bluegill is fun, and catching one is an excellent first experience for young anglers.

Bluegill are much more colorful than crappie and easily recognized by the dark spot on the side of the head between the eye and the gill. Other sunfish have different markings and can be as colorful as the pumpkinseed or as dull looking as the copper nose. Both white crappie and black crappie lack the brilliant colors of their sunfish cousins. Black crappie are more recognizable because of the dark spots that cover their entire body.

If you decide to catch a few of these sunfish on your next fishing trip, make sure you bring some small to medium-sized hooks, tip bobbers, and worms, minnows, or jigs that resemble aquatic insects.