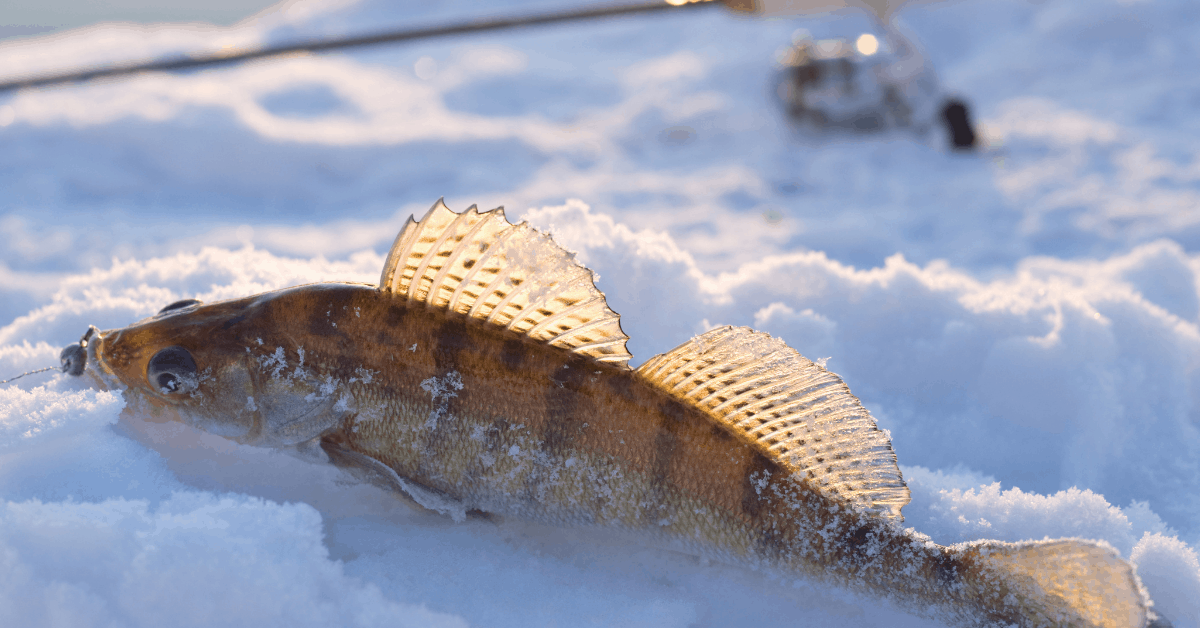 Ice fishing for walleye is very popular during the winter months in the northern regions of the U.S. and Canada. There are a few common types of lures used to catch walleyes through the ice, and in this article, we will list the best ice fishing lures for walleye.

The jigging rap is one of the most popular lures among walleye anglers, and it can be absolutely deadly on the ice.

The jigging rap does a great job of imitating a minnow in the water column. The lure can imitate an erratic and distressed minnow with darts and hops when jigged, and the fins on the tail swing the bait in a wide circling motion that is combined with a darting motion coupled with the rise and fall of the lure.

Jigging with a more subtle cadence or smaller rod pops will have it making smaller darting motions that turn into a slow and short glide. Fish this lure in weed pockets, rock bars, sand flats, or on edges, and get ready for your rod to receive some serious jolts. 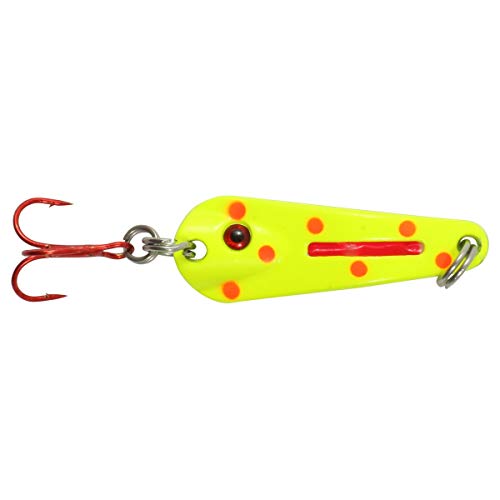 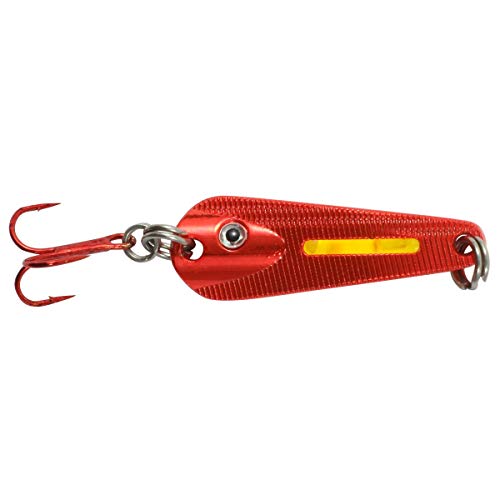 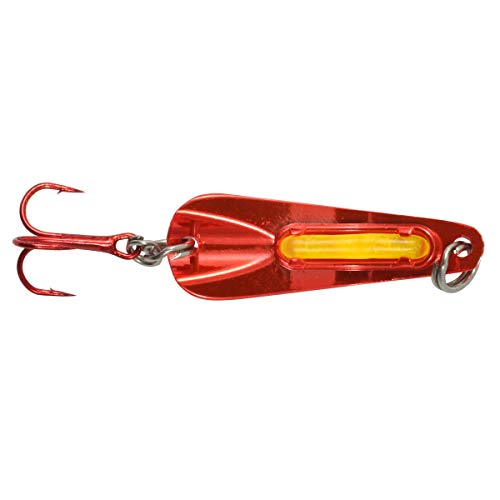 It’s no secret that at certain times walleyes will absolutely crush spoons. The Northland Tackle O-shot spoon is one of our top spoon choices for walleye.

The O-spoon is a relatively new lure to Northland tackles’ exceptional ice fishing lures line-up. It has a very interesting but effective design when compared to other spoons on the market and is also quite a bit different from another Northland Tackle offering linked below, the buckshot spoon.

One unique feature of the O-shot is the built-in glow stick. This glow stick when charged with a flashlight and used at night for walleye, creates an epic glow that is like a beacon to walleye, calling them in from far and wide. The spoon also features an S-curve design that gives it great action and wobble, and the bait also has some awesome colors to choose from. 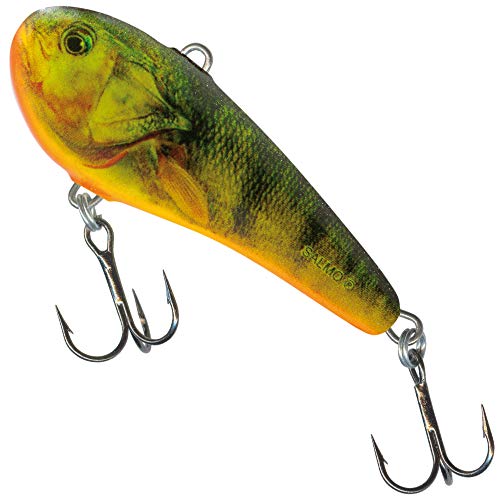 The Chubby Darter has become a fan favorite for ice anglers for a wide variety of predatory species, and walleye are certainly one of the main targets on the Chubby Darters’ hit list.

When jigging the chubby darter, you do not only get a very realistic baitfish imitation, but it also works for you on the fall, with a prolonged sink rate and an enticing strike wobble as well. It’s great for catching winter walleyes because they have a slower metabolism due to the cold water temperatures, and the slow sink rate gives the impression of an easy meal.

As mentioned earlier, the chubby darter has a slow sink rate, but the unique design of the chubby darter also means that it will slide and glide on the fall, as well as imparting the great wobble, giving you tons of subtle triggering actions when jigged. The chubby darter comes in several sizes and has some deadly-looking color patterns, some of which are incredibly realistic and natural, while others are colors that will stand out to the fish in low water clarity and for triggering neutral fish.

The Rapala Rippin Rap has had a surge in popularity when it comes to catching walleye both while ice fishing and while fishing on open water as well.

With a lipless and deep belly crankbait design that you would typically see for a rattle bait style of lure made for straight retrieves, which the Rippin Rap can do well, but this thing really excels at its role of being jigged and ripped under the ice.When this bait is ripped vertically, it will flutter back down thanks to its flat-sided and very narrow design, giving it a great triggering action.

With its insanely hard-thumping and vibrating action combined with a BB rattle chamber, the Rippin Rap will call in walleyes from a long distance in any water conditions to investigate. It’s great For Stained water, where a particular noise and vibration can really make a difference in calling in fish from long distances.

It’s also great for clear water, where its shudder action will throw off a ton of flash and color. You can also run this lure at any depth like all jigging baits,  and when you look into that 8-pound walleye, have no fear. This thing has high-quality and razor-sharp VMC hooks that will significantly increase your hooking percentage. 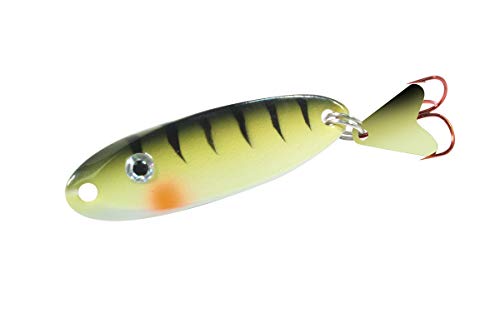 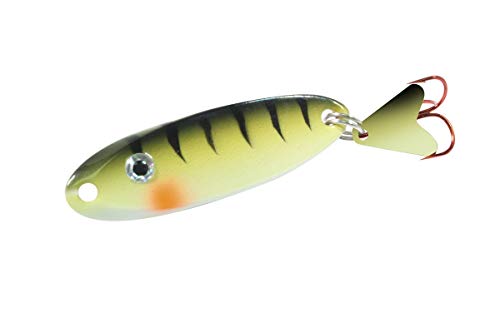 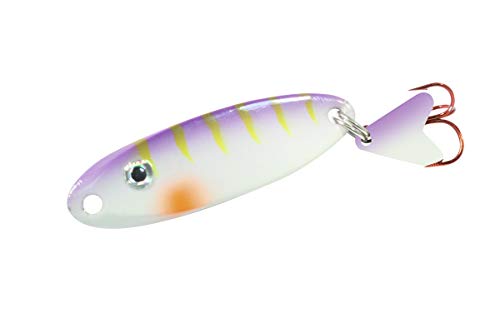 The Macho Minnow by Northland Tackle is a spoon made from cut brass and has some innovative design features custom tailored for ice fishing and incredibly popular with walleye anglers.

The edges of the macho minnow are beveled, and this beveled design gives the spoon a very erratic action in which the bait darts and tumbles to mimic a wounded baitfish.

The Tail kicker fin featured on the split ring with the treble hook compliments and assists the darting action, as well clattering and kicking to create the appearance of a fish tail.

The color patterns on these spoons are exceptional, and they feature holographic baitfish image patterns to create a ton of flash to make the most out of the tumbling flutter action, and many also feature glow paint in combination with the holographic stickering.

Tips for ice fishing for walleye

Now that we have some of the best ice fishing lures for walleye out of the way let’s look at some ticks and tricks for catching walleye.

Walleye can be found in different areas depending on the time of winter. In the early season or “early ice,” when the ice is 6 inches or less in thickness, you can find the walleyes cruising shallow weed flats and sand flats in search of food.

As winter progresses, you will find that on many lakes, they will push to deeper water and structure, with walleyes being found on edges, rock bars, around humps, points, or suspended. They can still be found in mid-depth weeds as well throughout the year.

Using a fish finder or flasher

Both fish finders like those made by Humminbird, Garmin, and Lowrance, and flashers made by companies like Vexilar, Marcum, and others, will work great for ice fishing for walleye.

Many units today feature both options in one sonar unit, and while some anglers prefer one type of sonar display over the other, it’s really up to you and your preferences on which one to use.

Different jigging cadences work better than others at different times and what works from one day to the next depends on the feeding mood of the walleye on that day.

The best approach is to start with a standard repetitive jigging cadence to see how the fish react. If the fish reacts negatively, you can change your cadence to include aggressive and fast snaps or rips to attract fish to you, or jig in patterns such as ( 1-2-3  pause 1-2 pause 1-2-3), or other various jigging methods like small rapid jigs to get fish to react.

Once you find what works and fish respond positively, you can repeat it for as long as it produces fish.

When ice fishing, safety should always be a #1 priority, this is especially true when fishing early or late ice or around areas where thin ice might be common like springs, creek or river inlets and outlets, or other areas.

Safety gear like ice picks that you can wear at all times around your neck are important in the event that you break through. Other tools like spuds to check the ice thickness in front of you as you walk out can warn you of incredibly thin ice.

Fishing with a friend is also a good tool for ice safety. In the event one of you were to break through the ice, the other can call for help or use a rope or other item to help pull you out.

Always let your family or friends know where you are fishing and when you plan to leave so they can check in on you, especially if the area is remote and other ice anglers are present.

Finding and catching walleye through the ice can be tricky for many anglers who are learning and for seasoned anglers alike. They will be present in large numbers in one area on one day and gone the next. These lures will work to hammer some big walleyes on the ice, but don’t forget to be mobile and adapt to make sure they are in an area with a large population of walleyes.