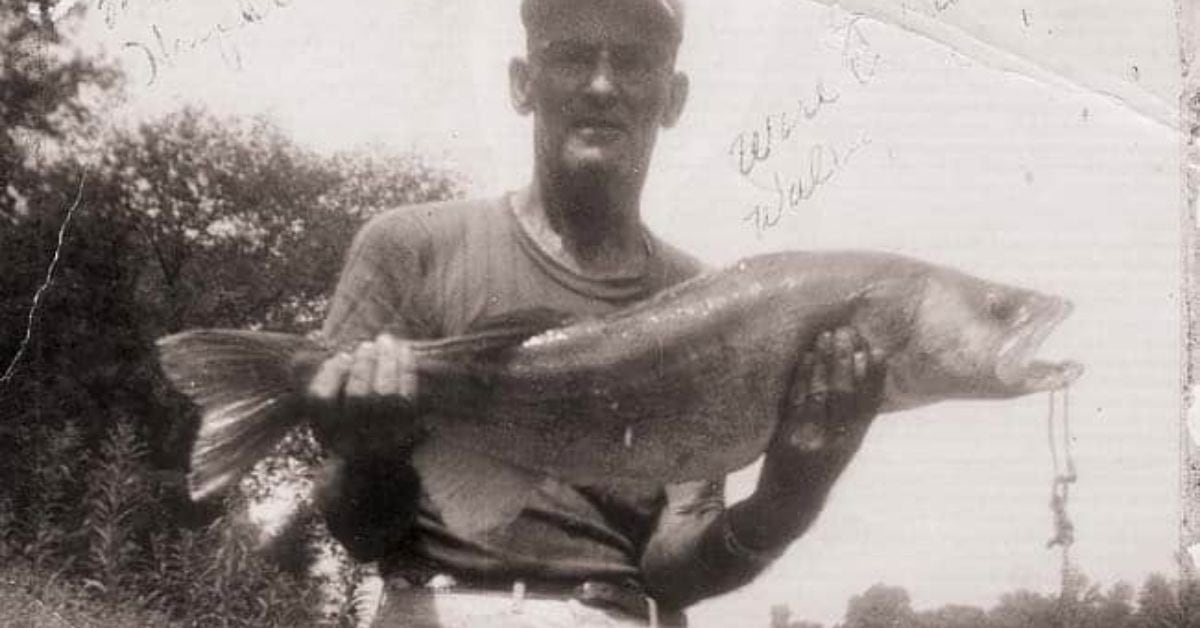 If you like a bit of controversy and drama, then the world record walleye catch held by Mabry Harper will be one of great interest to you.

Despite this record catch happening back in 1960, it was actually removed as an official record in 1996, before being reinstated again in 2010. It has remained unchallenged and unbroken ever since but the story of its cancellation and subsequent reinstatement has made this a particularly famous fishing world record.

In this article, we look at the details of the world record walleye including why it was removed, why it was reinstated, as well as the story behind the catch itself.

On 2nd August 1960, Mabry Harper headed out on a fishing trip to Old Hickory Lake in Tennessee. It was here that he landed his record-breaking walleye.

At the time, he was using a Betts rod, a Pflueger reel, and a baited Pflueger line.

The walleye he caught weighed in at 25 pounds and was a staggering 41 inches long. This is a huge fish and one that will very likely be difficult to beat anytime soon. While some anglers have been lucky enough to land walleye over 20 pounds in recent years, none have got anywhere close to Harper’s fish of 25 pounds.

The Cancellation of the Old Hickory Lake Record

In 1996, Mabry Harper had his world record fish canceled. He would no longer be the official world record holder as there was doubt cast on the validity of his catch.

The doubts were mainly based on the photo of Harper’s fish. The photo in question (which was taken in 1960) showed Harper holding the fish in his hands while posing for the camera. Someone raised concerns that the size of Harper’s hands in comparison to the fish indicated that the walleye he was holding couldn’t be 41 inches in length.

Back when the record was first recognized, there wasn’t much in the way of proof needed for world record consideration. A photo and someone to back up your claim were usually enough. That being said, the perks of holding a world record were pretty much non-existent when compared to what record-holders can get today.

Back then, there were no sponsorship deals worth thousands of dollars, there was no overnight fame, and there was no internet or social media so you can get your name out there as a world-record-setting angler. Instead, most world record fishermen back then were simply out trying to catch a decent-sized fish to feed their family for a couple of days.

However, enough people believed that the photo of Harper holding his walleye was proof that his fish had been smaller than he had claimed. Many people agreed that the size of his hands indicated the fish would not be the 41 inches he said it was but would, in fact, be smaller.

With the cancellation of Harper’s record walleye, a new world-record holder was named. The new world record walleye belonged to Al Nelson and the 22-pound 11-ounce fish he caught in Fairfield Bay Marina on Greer’s Ferry Lake, Arkansas.

Al Nelson caught his walleye in 1982 and his record would stand until Harper’s record came back into contention in 2010.

In 2010, the Fresh Water Fishing Hall of Fame reviewed Harper’s record claim. New photos came to light that seemed to suggest his initial claim that the walleye he caught was 41 inches long was actually correct.

They also reviewed the original photo of Mabry Harper holding his catch and re-evaluated the theory that his hands were too large for the fish to be the stated length.

What they realized is that a lot of the doubt raised about the photo was based on current photography standards and practices. Back in 1960, cameras were different, people took photos differently, and a lot less effort was put into taking them.

Taking into account things like distance from the camera and known sizes in the photograph, it is actually possible that the fish was 41 inches long as Harper had said.

What makes Harper’s world record walleye claim even more likely is the fact that additional photos have come to light that show his wife holding the fish in front of a 1959 Plymouth Custom Suburban car (the size of which can be confirmed), and these photos indicate a truly monstrous fish was caught.

Another photo showing the head of the fish with a ruler placed next to it was found and this also seemed to confirm that Harper’s claims were actually accurate and his record should have still been valid.

Other suggestions that Harper didn’t mount his fish because it wasn’t as big as he claimed were also discredited. Harper caught his fish to eat. As we mentioned earlier, many anglers of the time fished to put food on the table. Quite a few records were actually set on food-gathering fishing trips rather than the more leisurely fishing trips many anglers go on today.

After reviewing all of the old evidence and looking at the new photos too, it was decided that Marbry Harper and his walleye should be put back in the record books.

As it stands, the world record walleye is set at 25 pounds in weight and 41 inches in length. Harper is once again the record holder and all suggestions that his claim was inaccurate seem to have been discredited.