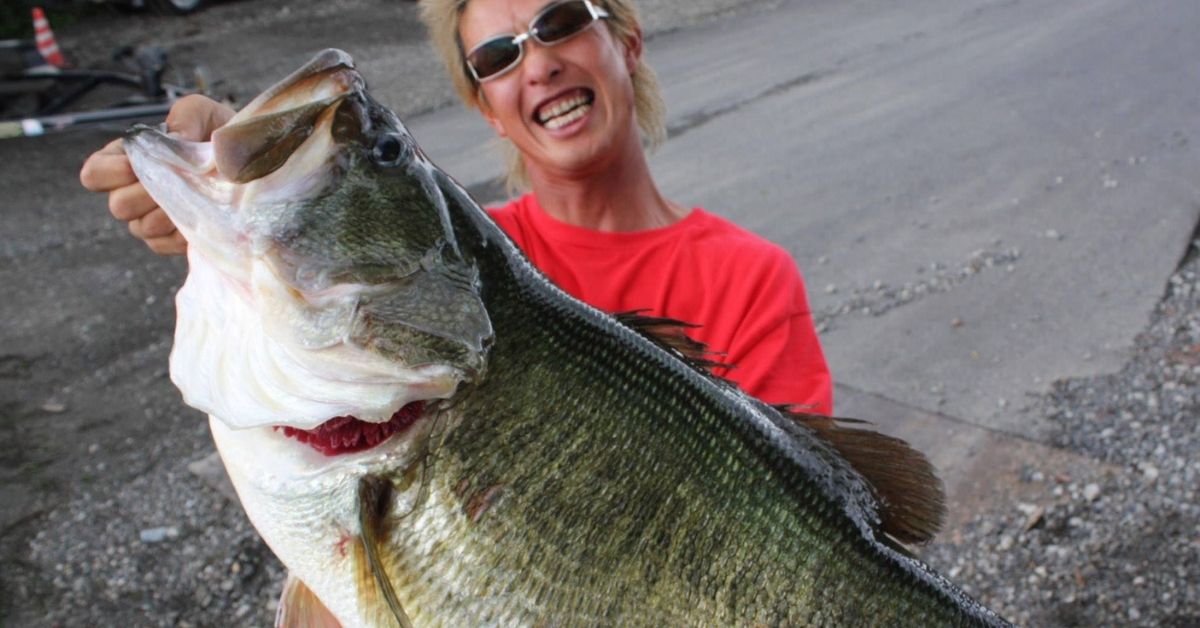 Breaking a world record is a pretty rare thing for anyone to achieve. Arguably, it is even more challenging to tie a current world record where exact weights, lengths, and precise measurements come into play. However, the world record Largemouth Bass is one of these rare records where there are technically two holders of the title.

While the original record was set all the way back in 1932, it was tied in 2009. Considering that the 1932 record was the first world record Largemouth Bass recorded, it goes a long way in showing how impressive the catch actually was.

In this article, we look at some of the records set by some of the biggest Largemouth Bass ever caught. Some have stood for a while while others have recently been broken as more anglers get their name into the record books.

On 2nd June 1932, George Perry was fishing in Montgomery Lake, Georgia with a friend. Neither angler was particularly involved with fishing other than using it as a way to feed their families. Little did they know that this fishing trip would end up feeding George’s family of six for two consecutive dinners!

A creek chub fintail shiner lure was used to catch the monstrous fish and it was probably a very exciting catch for George and his friend, as they could very likely see it would be a good meal to keep their families hunger at bay.

At the time, the IGFA (International Game Fish Association) didn’t exist so fishing world records weren’t something that too many people probably thought too much about. That might explain why George simply took the fish home and prepared it ready to eat. The only reason why the record is valid today is that he stopped to get his catch weighed at his local post office on the way home. Had he not done this, as he didn’t have any photos or other evidence of the fish, he wouldn’t have ever been a world record holder.

A little while later, George was told about a fishing competition that Field & Stream magazine was running. He submitted his measurements for the fish (despite having no photographic evidence) and he was declared the winner for his Largemouth Bass that weighed in at an impressive 22 pounds and 4 ounces. As the competition winner, George won some clothes and a shotgun!

Entering the competition proved to be even more important for George though as now his catch had been recorded in print (in Field & Stream magazine), there was documented proof of his gigantic catch.

Two years after his competition win, Field & Stream magazine began certifying world records. George Perry’s fish was the largest the team there had ever heard about (by quite some way) which led to George Perry becoming the world record holder for the biggest Largemouth Bass ever caught.

The world record Largemouth Bass remained unchallenged for a long time. Even with the rise in popularity of bass fishing, no one could seem to get close to the massive bass that George Perry caught all the way back in 1932.

There was a time in the early to mid-2000s that it looked like the record was going to be beaten though. A Largemouth Bass, affectionately known as Dottie thanks to an obvious black mark near her gills, looked like she would be a record-breaking catch. Dottie was originally caught in 2003 and weighed very close to 22 pounds. She was released before being caught again three years later, in 2006. At this point, she weighed enough to beat the long-standing world record and things were looking very promising for Mac Weakley – the angler who caught her. However, as Dottie had been hooked on her side and not in her mouth, the record claim was invalid.

It was another three years before the 1932 world record bass would be challenged (and this time it really was put under pressure). On 2nd July 2009, Manabu Kurita, a Japanese angler, set out on a fishing trip in Lake Biwa, Shiga, Japan. It was here that he landed the biggest Largemouth Bass caught in a very long time. The massive bass weighed in at 22 pounds 5 ounces – one ounce more than the current world record!

The reason why Manabu Kurita is not the new world record holder is that the IGFA has a regulation that any new record-setting catch should outweigh the current record by at least two ounces. While Manabu might not be the new independent world record holder, he is the tied record holder which is still a huge achievement.

Manabu’s catch was verified by a polygraph test which he passed, proving he was telling the truth about all details of the record. He landed the giant fish with a Deps Sidewinder hgc-77rx rod, Shimano Antares dc7 lv reel, Toray super hard str line, and Bluegill as bait.

The IGFA fly tackle record for Largemouth Bass is currently held by angler John R. Kelly, Jr who caught a 20.47-inch (52cm) fish in Stuart, Florida on 7th February 2022. At the time of the catch, he was using a Loomis IMXPro 1 rod, Hatch 5 Plus reel, Ande tourney Green line, and a Brushmouth Swimbait fly.

Angler Terry McAbee holds the 6lb line class record with his catch weighing in at 16 pounds 9 ounces. He caught his record-setting fish in Lake Isabella, California on 18th March 1998 and it has stood ever since.

Raymond Easley caught a Largemouth Bass weighing 21 pounds 3 ounces in Oakview, California back in March 1980. This set the record in the 8lb line class and has managed to fend off all competition to this day.

Largemouth Bass is one of the most widely distributed fish in the world. As the species is such a popular sport fish, it has been introduced to many environments globally where they would not be found natively.

They are native to most of the eastern half of the United States but they can now be found in most states in swamps, ponds, lakes, reservoirs, creeks, and large rivers. Globally, they can also be found in South Africa, Europe, Guam, Japan, Lebanon, New Zealand, and the Philippines.

The average length of Largemouth Bass is commonly around 18 inches although fish up to 24 inches or more have been known. When it comes to weight, usually these fish weigh in somewhere between 1 and 10 pounds but, as you can see from some of these records, much larger fish are out there.

Largemouth Bass are carnivorous and they eat a wide range of prey animals. Their diet can consist of fish, crayfish, frogs, newts, dragonflies, and virtually anything else they can fit in their mouths!

They don’t actually always eat their prey immediately either. Instead, it is caught and held in their jaws until they are ready to swallow it down.

Tips for Catching Your Own Record Setting Bass

If you are fishing for a record-breaking Largemouth Bass, then it could be a good idea to head to waters where other large fish of this species have been caught. Some of the places that feature in multiple records for Largemouth Bass include

Change Your Mindset to Target Trophies

Catching trophy fish is not the same as catching regular fish. You need to understand and accept that you are not likely to catch many of your target fish on a regular basis. Most trophy fishing trips will probably end with you going home empty-handed. However, if you are patient and stay determined to land a big fish – eventually you might just get lucky enough to do so.

Largemouth Bass don’t feed throughout the day, instead, they wait for a large meal that they can grab with minimal energy being exerted. A large appealing bait will increase your chances of attracting a big bass.

Fish get big when they are able to survive long-term in relative safety. Any water that is heavily fished or has lots of potential predators will likely not be home to giant Largemouth Bass. If you can find areas where anglers don’t go and the fish can live a quiet, carefree existence, these are the places where the real big bass are likely to be.

Gear Up for the Record-Breaking Fight

If you are trying to land a really big fish, then you will need to spend a lot of time out on the water. As Spring is usually a good time for big bass fishing, you need to make sure you are prepared for all weather conditions.

You will need sun protection and clothing that can help keep you cool in high humidity. Depending on where you are fishing though, you might need to think about some other types of outdoor gear to make sure you have everything you need for long days on the water while you hunt for those elusive big fish!