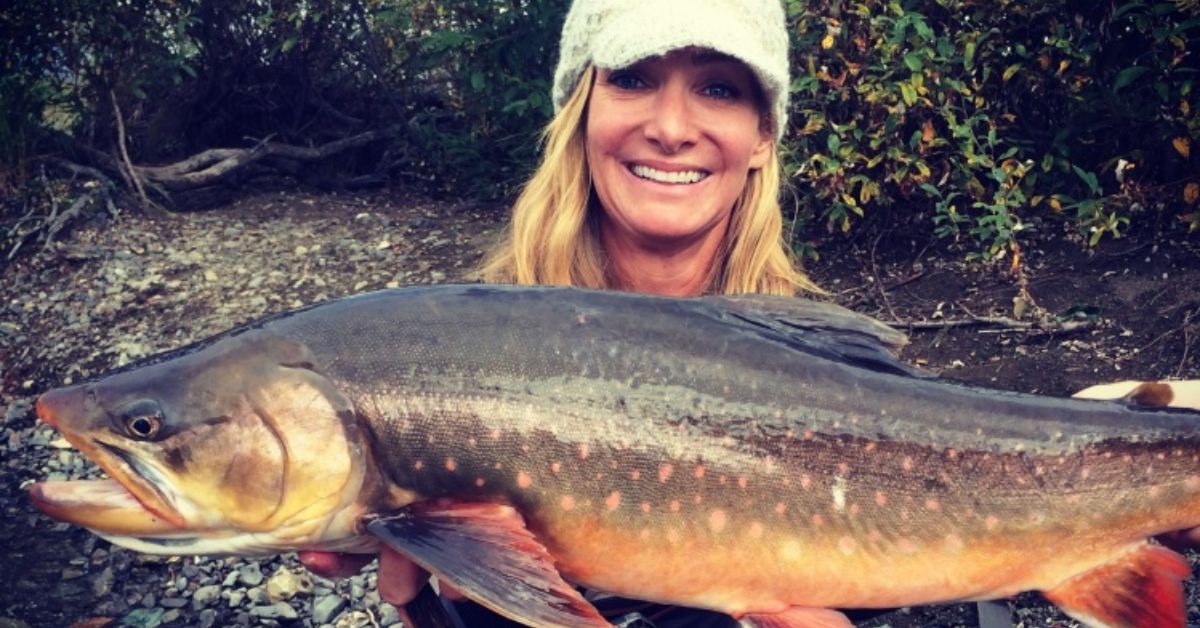 Dolly Varden are a great sportfishing target in northern Pacific region. An aggressive and large char species, they are fun to tempt on fly tackle or light lure gear.

Alaska really is the Mecca of Dolly Varden fishing. Fish taken in Alaska account for almost all IGFA world records including the All Tackle weight and length record and various fly fishing dolly varden records.

There is quite a bit known about Raz Reid, the former tennis player and Sage representative has held 20 or so IGFA world records on the fly. However, about this specific Dolly Varden catch very little is known.

All we really have to go – until Raz decides to get in touch to share some info – is the description from the IGFA site state it was caught on a Sage rod with Tibor Everglades reel on 14lb tippet. The big dolly took a Starlite Leech pattern.

Again, there is little known about how this huge dolly was taken, although there is a nice picture of Meredith with the fish. We know it was taken again on a Sage rod with a Galvin reel on comparatively skinny 8lb tippet and the fish took an egg pattern.

Alaska and Canada are the key places for large Dolly Varden. Dollies are found in the Sea of Japan through the Kuril Islands to Kamchatka, through the Aleutian Islands and around Alaska to the Yukon and Northwest Territories (Canada) in the north and the northwestern United States in the south. Like the Arctic char (Salvelinus alpinus), it is an anadromous fish (migrates to the sea and back), though some populations are landlocked.

Up to 20lb and beyond

Anadromous dolly varden spawn in the fall in headwater streams and the young fish stay in the freshwater environment before making their first migration to sea within two to four years of birth.

Their movements within a river system are complex and they can be found in lakes and connecting streams depending on the season. They do follow the salmon runs upstream in the summer to take advantage of the food spilling down the river in the form of salmon eggs.

An attractive fish, Dolly Varden get their name from a bright fabric pattern that was popular in dress making in the 19th century.

Dolly Varden are a large predatory char that actively hunt small fish and feed on fish eggs washed down the river during spawning. Streamer fishing is the way to pick up dollies on the fly, ideally with a sink tip line and egg sucking leech type patterns.

Dollies will also take baitfish style streamer patterns as well as minnow lures and spoons for the lure fishers.

The Alaska Department of Fish and Game has some great info on fishing for Dolly Varden, with tips suggesting:

“Try fishing near spawning salmon, in deep holes, and at the creek mouth on an incoming tide. Fishing for sea-run Dolly Varden in lakes can also be good as they migrate into lakes from late August through October, and are in prime condition after their spring and summer growing season. Ice fishing in lakes during the winter can also provide excellent angling opportunities. A sea-run Dolly Varden caught on light tackle can be an experience not easily forgotten and like other char, the Dolly Varden’s pink, firm flesh is full of flavor.

“Knowing that Dolly Varden hang out at the stream mouths and in the near-shore environment during the spring, and that they are feeding on emigrating pink salmon fry will lead anglers to try small spinners and or fly patterns imitate small fish. As the salmon fry grow and migrate along the saltwater beaches and shoreline during late spring and summer months try using slightly larger streamer flies and lures which imitate small silver colored fish. Coastal streams in August and September can produce excellent fishing for those using spinning lures or fly patterns which imitate salmon eggs drifting downstream.”