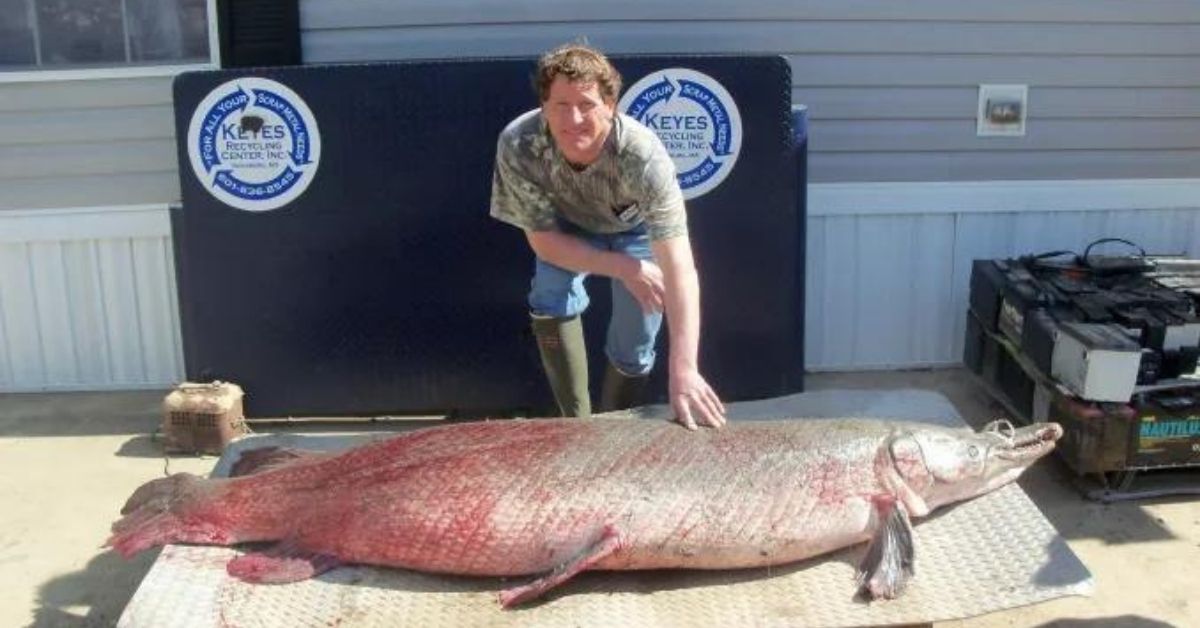 Alligator Gar is one of the largest freshwater fish that can be found in North America. They commonly reach lengths of around five to six feet although some truly monstrous Alligator Gar have been seen and caught.

The biggest Alligator Gar ever caught was actually caught by accident when the giant fish got caught up in Kenny Williams’ fishing net in Mississippi Lake.

The Gar was over eight feet long and weighed 327 pounds. The fish was believed to be a female aged around 70 – 90 years old. Unfortunately, it didn’t survive the experience but its body has been put on display in the Mississippi Museum of Natural Science as a permanent reminder of its colossal size.

The IGFA world record Alligator Gar is held by Bill Valverde for his 279-pound catch he landed in the Rio Grande River, Texas back on 2nd December 1951.

Amazingly, to catch the largest Alligator Gar ever caught (intentionally) Bill used a homemade bamboo rod with a Montegue reel and an Ashley line. Mullet was the bait that lured the record-breaking fish onto Bill’s line.

He was casting and using live mullet as bait when he landed the biggest Alligator Gar in this class.

On 12th June 2021, angler Jennifer Schall was fishing in Trinity River, Texas when she caught an Alligator Gar weighing 132 pounds 6 ounces. If that’s not enough to convince you this was a big fish, it had a girth of 34 inches so certainly would have been an impressive fish to see.

Casting with a GFG rod, Okuma reel, Platypus line, and carp as bait – Jennifer was able to land her monster catch.

All about Alligator Gar

They can be found in areas spanning the Florida Panhandle, through the Gulf Coastal Plain, and the Mississippi River Basin going north to the lower sections of Ohio and the Missouri River. They can also be found through Texas down to Veracruz in Mexico.

Alligator Gar usually grow to around six to seven feet in length and tend to weigh over 100 pounds.

However, much larger fish have been caught with some being close to 300 pounds (and some weighing even more than that).

Alligator Gar are becoming increasingly more rare due to overfishing and water controls being built such as dams. These cause loss of breeding habitat for Alligator Gar resulting in reduced numbers.

Alligator Gar are considered rare in Missouri, threatened in Illinois, and endangered in Arkansas and Kentucky.

As the Alligator Gar is a very large fish, larger live bait tends to be most effective. Common bait for Gar fishing includes carps, gizzard shad, and mullet.

These big fish tend to thrash violently so several feet of steel leader can be beneficial to counter this (not to mention the sharp teeth too!)

While eating Alligator Gar is certainly possible, it isn’t always a popular option due to the amount of time and effort it can take to properly prepare it.

The scales are extremely tough and, once through those, you’ll need to discard any meat that was close to the stomach, stomach contents, or any eggs. All Gar species have ichthyotoxin in their eggs. This is a protein that is extremely toxic to humans so anything that has been near Gar eggs needs to be discarded safely.