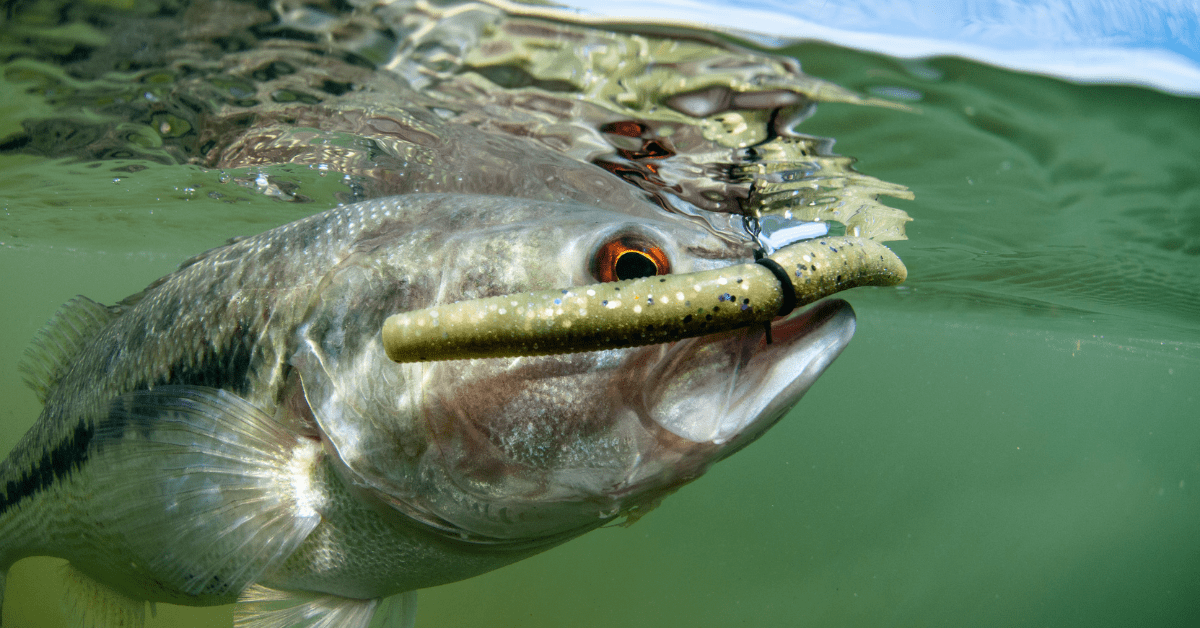 Bass are a favorite catch for avid sportsmen, but not all bass are alike. The spotted bass and the largemouth bass, for example, can be easily confused. In states with different regulations for different bass species, it is important to know what you’re catching. Let’s compare spotted and largemouth bass.

Difference Between Largemouth and Spotted Bass

Overall, largemouth bass and spotted bass have a very similar appearance. Both fish are long and slender, with a long dorsal fin and a wide tail. Both have large mouths and a similar greenish-grey body color. Often the two fish share the same waters and will go after the same lures, but the spotted bass and largemouth bass are two distinct species with many differences.

Largemouth bass, spotted bass, and many other fish belonging to the bass family can be found in the primarily warm waters of the central and eastern United States. They occur in natural lakes and rivers in the lower half of the country, especially congregating in the gulf states. Florida largemouth anglers refer to largemouth as black bass, because the peacock bass is also a common game fish in the Sunshine state. Largemouth bass and spotted bass are also found in North Carolina, Kentucky, and Tennessee waterways. Some bass anglers actually refer to spotted bass as Kentucky Bass, because of the large populations of these fish in the Ohio River, which borders northern Kentucky and in Kentucky Lake, which lies in Kentucky and Tennessee.

If you examine the tongue of each fish, you will find another difference between the two species. The spotted bass has a small, rectangular rough patch on the tongue. The largemouth does not; he has a smooth tongue. Of course, when you catch one of these beautiful fish, you aren’t likely to examine its tongue, so it is important to know other key differences between the fish.

Cheek scales can give you a clue about the species. The largemouth bass has larger cheek scales, similar in size to the other scales covering its body. The spotted bass, however, has smaller scales along the cheeks, the same size or smaller than its body scales.

Perhaps the easiest way to discern spotted bass and largemouth bass is by looking at the markings on the fish. Both the spotted bass and largemouth bass have greenish-grey bodies with silver or black flecks of color along the back portion of the fish. Both fish will also have a lateral line that runs from the gill to the tail, but spotted bass generally have a more distinguishable lateral line that looks like a continuous stripe. Largemouth tend to have a less noticeable line.

Another distinguishing mark to determine the species of the two fish is stomach markers. Spotted bass tend to have rows of spotted stripes under the spotted lateral line that runs from gill to tail. These spots are not all the same size, but they clearly form lines along the stomach of the fish. Largemouth bass just have a plain white stomach.

While the two species can coexist in the same water body, these fish live in different parts of that water.

Spotted bass prefer to stay active year round. They may move into the shallower waters in late spring to spawn, but generally spotted bass live in deeper, clear water. They prefer to hand out in schools around underwater structures.

Largemouth bass aren’t as picky about water clarity. They like to hang around rocky areas, fallen trees, and bush cover in murky water. During the day they will lay in a shady spot in three or four feet of water. When nightfall approaches, they will come into the shallows to feed on topwater bugs.

The IGFA recognizes three named subspecies of spotted bass.  The Alabama spotted bass that lives in Georgia, Alabama, and Tennessee; the Wichita spotted bass, which can only be found in Oklahoma, and the northern spotted bass or Kentucky bass.

Spotted bass are social creatures. They are rarely alone and sonar will often mark groups of more than two fish.

Largemouth bass are territorial, and they are bullies. They will hide under cover and eat anything that comes into their area. They don’t like to be bothered and prefer to be alone.

Spotted bass will stay more active through the winter than other fish species. When the water temperature in the top third of the water column gets too cold, they dive deeper into warm water. Spotted bass have been caught in the winter at depths up to 100 feet. Even though it is possible to catch spotted bass in cooler temperatures, you still will do better during spring and fall.

There is really no major difference in the gear you need for smallmouth vs. largemouth bass fishing. A light action to mid action rod with a sensitive tip gives you good bite alerts and allows the fish to fight without tiring him out. Many anglers prefer a baitcaster spooled with braided line and a fluorocarbon leader. Personally, I like a four to six pound test monofilament on a spinning reel. Having lightweight, flexible line gives you the stretch you need when that largemouth explodes out of the water and starts thrashing his head from side to side to try to throw that hook. It is also strong enough to withstand the fast, deep dive of the spotted bass.

No matter what gear you choose, fishing for bass is fun even if you don’t catch any.

Fishing is a little bit research, and a whole lot of luck. Try to know the insect patterns and shad hatching periods for the waterway you are fishing. Some anglers swear by topwater frogs and partially submerged rubber worms. Others prefer live bait like crickets or nightcrawlers.

A lot of it depends on the time of year and the water temperature. In the fall, largemouth come to the surface to fill up on waterbugs and mosquitoes. Throwing a topwater bait at them makes sense. In the spring, when they are in a nest, they are going to hit anything that gets too close.

Being able to catch a fish is the hardest part of fishing, and it is sometimes a guessing game.

Knowing the difference between spotted bass vs. largemouth bass will help you know how to fish, where to fish, and when to fish. It might also save you a big fine if you catch the wrong one at the wrong time. Use your fish finder to locate them in the shallows near shore or out in the deep part of the lake. Offer bait that is similar to what they are already eating. Once you catch that bass, take a good look at it to figure out what kind it is. Sometimes it is hard to tell, but the length of the jaw, the shape of the dorsal fin, and the stomach markings are all good indicators.  Whether it is a spotted bass or a largemouth bass, you are going to have fun reeling it in, and it will taste delicious.