Palomino Trout: What Are They And How To Catch Them 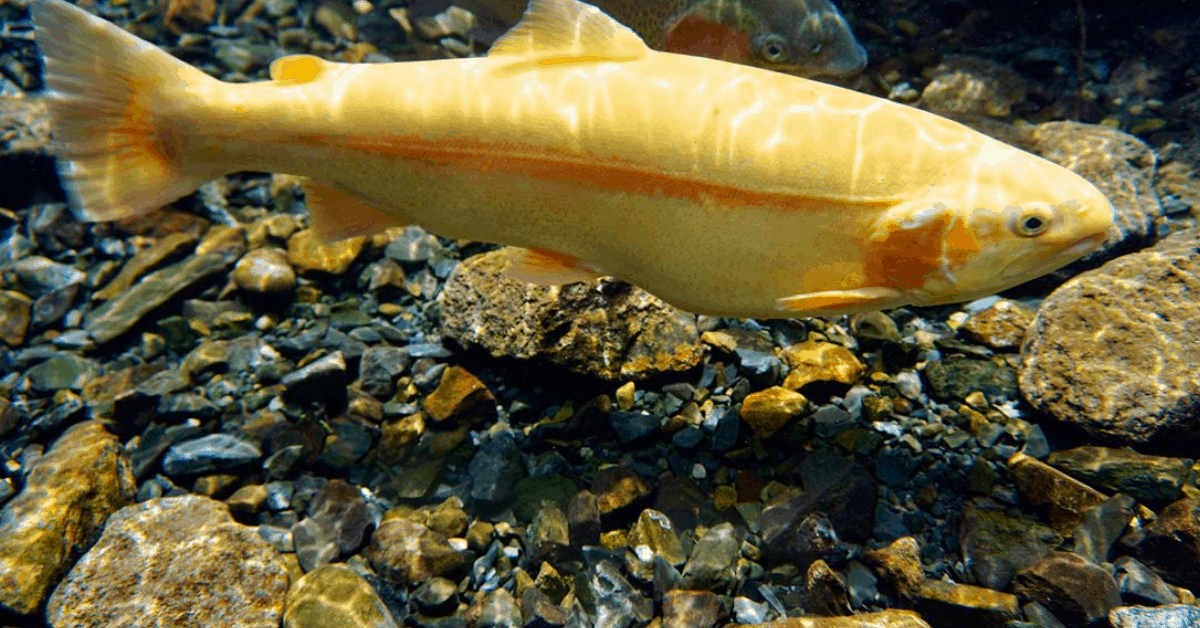 It’s not uncommon to find gold in the mountain streams and rivers of the Appalachian mountains, but many anglers venture into these hills in search of a different kind of gold. The golden rainbow trout is one of the most unique fish in North America and has captured the attention of anglers for more than half a century. These fish are also known as palomino trout or West Virginia golden trout and they are known for their distinctive bright yellow coloration.

Their origins can be traced back to the Mountain State of West Virginia and they are vastly different in appearance from any other fish you’ll find in the state. The emergence of the golden rainbow trout began in 1955 when workers at a fish hatchery noticed a unique fish that stood out from the rest.

The hatchery raised rainbow trout, but this one bright fish appeared quite different. Instead of having the same pigmentation as a regular rainbow trout, the trout’s body color was bright yellow. This was due to an extremely rare genetic mutation that normally pigmented rainbow trout do not possess.

This one fish was taken and was studied by scientists who worked to produce a new species of golden trout through selective breeding with typical rainbow trout. By selectively breeding this single rainbow trout, the golden rainbow trout originated and has since become one of the most sought-after trout species in fly fishing.

Through these cross breed species of such bright fish, biologists have gone on to produce vast numbers of self-sustaining populations in small creeks throughout North America. The golden rainbow trout or palomino trout has now become one of the most popular trophy fish in the country.

It’s one of the most famous trout species in sport fishing or fly fishing and is sought by nearly every avid angler with a fly rod. From one single fish in West Virginia, an entirely new cross breed has emerged and is bred and sold from fish hatcheries all throughout the United States.

This article covers all the facts and information you need when it comes to fishing for golden rainbow or palomino trout.

Where to find Palomino Trout

Golden rainbow trout can usually be caught in most areas where you might expect to find other trout, especially brown trout, brook trout, lake trout, and even salmon species like cutthroat trout. Palomino trout are capable of living their entire life in the wild and can reproduce, unlike other hybrid species like tiger trout.

Palomino trout (Oncorhynchus mykiss aguabonita) are very similar in their physical appearance to other trout species. Despite being such bright fish, their physical traits – skin color aside – look almost indistinguishable from that of brook trout and regular rainbow trout, as well as brown trout.

Golden rainbow trout, much like rainbow trout and brown trout, will develop a large hooked jaw as they mature. Like other trout, palomino trout have a similar adipose fin, which is found between the dorsal fin and the caudal fin, or tail.

The palomino trout is known to have red horizontal marks along their lateral line, which is very similar to rainbow trout, which they are closely related to and also have a purple or reddish lateral line. The belly of golden trout can be a pink or orange color, which becomes more vibrant in spawning males.

Palomino trout are known to grow much larger and faster than regular rainbow trout due to hybrid vigor, which is also known as heterosis. Hybrid vigor is enhanced function of the palomino trouts’ biological systems as a result of hybrid breeding.

How to Catch Palomino Trout

The best method of catching palomino trout is virtually the same techniques you might employ for targeting rainbow trout or brook trout and even lake trout. They are known to feed voraciously on salmon eggs and, like other species of trout, will strike at many different types of flies and spinner lures.

Palomino trout are known to be much harder to catch than rainbow trout, brook trout or brown trout, but this is mainly thought to be due to the fact that they get more pressure. Like tiger trout, golden rainbow trout are easily spotted in any stream, which means anglers will be able to see them (particularly if using polarized fishing sunglasses) and cast to them effectively.

Catching Palomino trout on the fly

The techniques and presentations you might use to catch palomino trout are virtually the same as what you might use for rainbow trout or other species. Some anglers in states like West Virginia have learned that these fish are so highly-targeted by other anglers that they have to resort to using flies or nymphs that are very different than what they might normally cast at native brook trout or rainbows.

You’ll want to use dry flies for palomino trout much like you would any other species. It’s also a good idea to fish with streamers that are different than what other anglers are throwing as the palomino trout in any stream might take interest in different colors that they are not so used to seeing.

This is a great strategy for states such as West Virginia where palomino trout are very highly-pressured. The only way to guarantee that you’ll have a greater chance of catching palomino trout when fishing in a popular area is to get to the best locations as early as possible right before the fish are stocked.

Many anglers that fish for lake trout often use various lures to catch them. Although there are not any known palomino trout in the Great Lakes, you can catch them in some lakes throughout this area. It’s best to use lures like worms or insects to catch palomino trout in lakes, as well as streams.