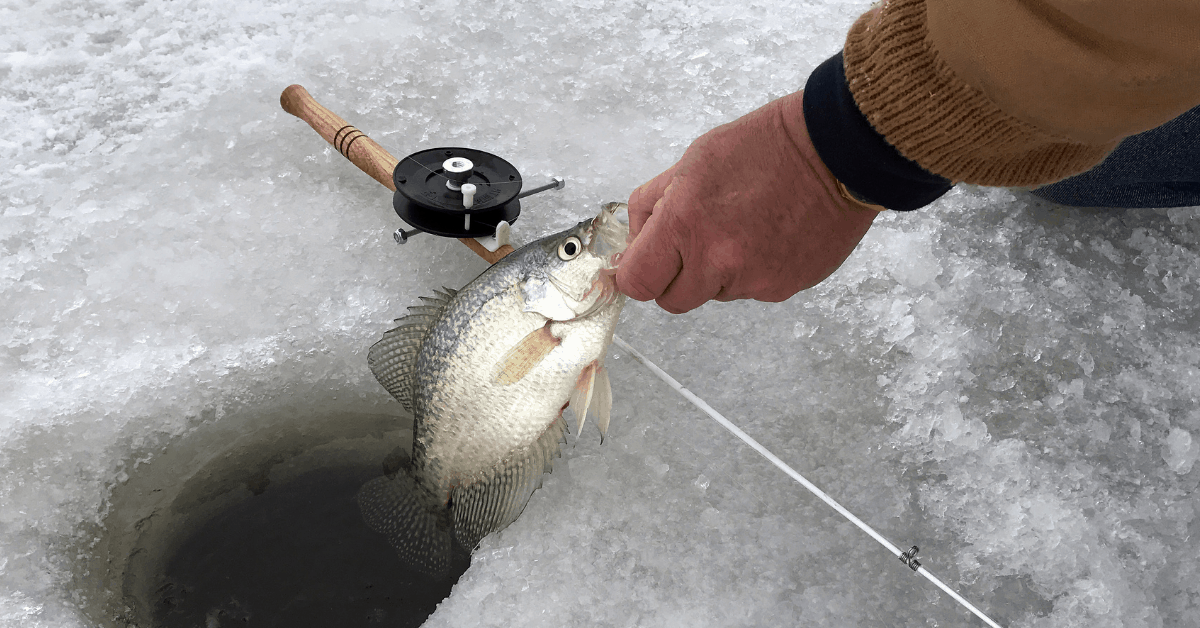 Ice fishing for Crappie through the ice is an absolute blast and it is also a prime target for many hardcore ice anglers. They can be found in a wide variety of locations from shallow cover to deep water, and when they are aggressively feeding it can be non-stop action.

10 of the best ice fishing lures for crappie

A great looking soft plastic with a matching jig head, the slug bug by the impulse line of soft plastics produced by Northland Tackle is a great crappie catching lure.

The slug bug has a very realistic look, complete with the little stumpy bug legs, and a wispy tail that gives it a nice action with even the slightest movement, perfectly imitating a snack for a crappie to slurp up.

The Torso of the soft plastic bug is also segmented, and the jig head features very realistic looking eye features.

The Rapala Jigging rap is one of the most used artificial ice fishing ice fishing lures on the market. used lure to catch Walleyes not only through the ice, and not just for crappies, but for a wide variety of species. The rear angled fin on the tail of the Jigging Rap makes the lure swing out and hop and glide in a circular fashion with an incredible one of a kind appearance.

Anglers fishing suspended schools of crappies will see their flashers light up like a christmas tree as the crappies race each other to be the lucky one to get a snack. The swinging action excels in open water situations, but the bait also performs extremely well as a bottom bouncer in a yo-yo fashion, kicking up silt and triggering bottom hugging walleyes to strike, and don’t count out weed pockets either, it can be used just about anywhere.

With multiple sizes varying from 1 ¼ “ to 3 ½” you have a lot of wiggle room depending on what the fish want, and the amount of color patterns available is off the chart.

The Swedish pimple is a classic and staple lure for ice anglers. It has a slender body that flutters with the chrome ones giving off a ton of flash, it also has color mixed in with the sticker on the flat side of the body.

There are also a ton of colored spoons to choose from, and Bay De Noc releases new color patterns frequently like their crushed ice holographic patterns.

The Swedish pimple when tipped with live bait like wax worms or a minnow head is incredibly effective, and you can even back hook rosy reds or crappie minnows whole, and let them do the work under a jigging rod or tip up.

One look at this jig and you just know it’s gonna lay the smackdown on any panfish that comes across it, and crappies will have no problems slurping these things up.

The soft plastic that is coupled with the nymph jig resembles many different types of prey in a crappies aquatic environment, from well, nymphs, to small fry and minnows, and other creepy crawlies.

The soft plastic is TriggerX so it comes loaded with fish attracting scent, and comes in a variety of colors including two-tone, glow, and natural colors, and the VMC wide gap hook will ensure you keep more of those paper-mouth crappies pinned.

Many crappie anglers will tell you that bucktail jigs and catching crappie go hand in hand, and the little nipper by Lindy is a bucktail jig that will seal the deal over and over.

The bucktail hairs are wrapped with a liberal amount of thread and then glued to prevent any hair separation from the jig, as well as keeping the hairs in the proper orientation.

The bucktail hairs will move and breath with the slightest of movement, giving the impression of a baitfish, and unlike some soft plastics, the cold water doesn’t stiffen and reduce the action of the bait, making it a great option year-round, not just for ice fishing for crappie.

The Buckshot spoon is a great option for crappie, in any water clarity conditions thanks to the rattle chamber that is fused into the brass spoon.

The bait also features an excellent fluttering and tumbling action, allowing you to really rip this bait, and send out a ton of vibration, flash, and color to call in schools crappie from long distances.

Coming with a red treble hook, the buckshot spoon also comes in a wide variety of color patterns which include natural baitfish patterns, holographic patterns, bright patterns, and glow patterns.

The buckshot spoon has become very popular over the years, and is now considered by many to be one of the must have ice fishing lures.

The Chubby Darter is a great artificial lure to use for crappies through the ice and is similar to other lures on the market like the jigging rap, but the action of the salmo chubby darter puts it in its own niche of fishing lures.

When jigging the chubby darter you will produce a wobbling and gliding action on the fall coupled with perfect sink rate for crappies on the ice, with a slow sink. The sink rate is great for catching winter fish that have a much slower metabolism as a consequence of the cold water temperatures.

The well thought out shape and design of the chubby darter also allows it to slide and drift several feet in a horizontal manner on the fall, so it’s not just a standard vertical jigging fall with a wobble, it also imparts an enticing swim as well.

The chubby darter comes in several sizes and has some deadly looking color patterns, some of which are incredibly realistic and natural looking presentations.

This soft plastic is a perfect imitation of prey that all panfish would eat. They closely resemble nymphs like mayfly nymphs.

The Bernie is also much stronger compared to other soft plastics of the same size, and the amount of detail that 13 Fishing was able to put into such a small soft plastic presentation is actually mind blowing.

The Gulp! Line from Berkley has changed how I approach crappie ice fishing forever. I rarely use live bait anymore if I am being honest, and the Minnow and waxworm versions will catch just as many if not more crappies than live bait.

The Berkley GULP! minnow is the closest imitation to actual live bait that I have used, thanks to the liquid scent it is packed in and a soft but ultra durable body. Put one of these on a jig and see for yourself, it will also last much longer than live bait or even other types of soft plastic baits.

The wax worms are equally effective as the minnow version at times, and you can easily tip 2 or three on the treble hook of a spoon like the buckshot minnow, or even the bottom treble hook of the Rapala jigging rap to absolutely crush the crappies.

Again, these things last way longer than real wax worms, so don’t be surprised if you catch a dozen fish on the same imitation wax worm.

The itty bitty swimmer is an awesome little paddle tail soft plastic bait that comes in at 1.25 inches but packs a considerable punch. It can be used during both the open water season and while ice fishing.

The wispy little paddle tail kicks with ease and really mimics the movement of tiny baitfish, and you get 25 of them in a pack, giving you enough for a ton of fishing.

Tips for ice fishing for crappie

There is a pretty good chance that you can contact crappies in weed beds or submerged structure like tree tops and stumps along with other panfish, and this is particularly true during the early ice season when there is only a few inches of ice on the lakes.

Things get a little tricky when it comes to suspended fish. Suspended crappies are always on the move in search of food, so you might find a pod of fish and within as little as 5 or 10 minutes, they may be gone.

Some lakes will see deep water areas with schools moving in and out of the area frequently, so it might pay as an angler to stay put and wait for the next school, other deep water areas like mid lake basins on large bodies of water can be very different, and require anglers to stay highly mobile through the day in search of roaming schools.

Using a fish finder or flasher

Both modern fish finders and flashers will work great for finding and catching crappie. In particular, the more modern sonar units that have 360 scanning and can see around your location instead of straight down can really pay off when searching for suspended fish.

Flashers are excellent at working on trigger crappies that you have found to eat, and you can get a clear picture of fish activity on them with some practice, but the down side is you are limited to the transducers vertical cone and cannot see what’s around you.

Luckily, modern fish finders tailored to ice fishing offer both sonar screen, and flasher screen settings allowing you to choose which one you need in the same unit with the click of a button.

Just Below the Ice

Sometimes crappies will be hanging out directly below the ice, as close as a foot or even less away from the bottom of the ice sheet. They may be so close that your flasher or sonar unit won’t be able to pick them up on screen.

Every now and again reel your bait to within a couple feet of the ice and check, you might be surprised to find that school of fish you marked earlier being within feet of, well, your feet.

Crappies have notoriously thin skin on their mouths, and you might hear some anglers refer to them as “paper mouths.” It’s a good idea to use a noodle style jigging rod, or a rod with a lot of flex and a weak backbone when ice fishing for crappie.

These noodle rods absorb lots of the shock during hookset and give crappie anglers a better chance at keeping the fish hooked, and not ripping a giant whole in their thin skin that results in the hook coming out.

Different jigging cadences work better than others at certain times, and what works from one day to the next depends on the feeding mood of the crappie on that day.

The best approach is to start with a standard repetitive jigging cadence to see how the fish react. If the fish reacts negatively, you can change your cadence to include aggressive and fast snaps or rips to attract fish to you, or jig in patterns such as ( 1-2-3 pause 1-2 pause 1-2-3), or “ rip, rip, fall.”

Other various jigging methods like small rapid jigging can get wary or neutral fish to react. Once you find what works and fish respond positively, you can repeat it for as long as it produces fish.

Ice fishing for crappies can be a action packed frenzy one moment and the next will have you searching far and wide on the open abyss of a lakes basin to find any to catch, not all lakes are the same, and crappies may be incredibly abundant in shallow waters as well, once you find crappies in any body of water, the lures featured in this list will undoubtedly help you catch them.