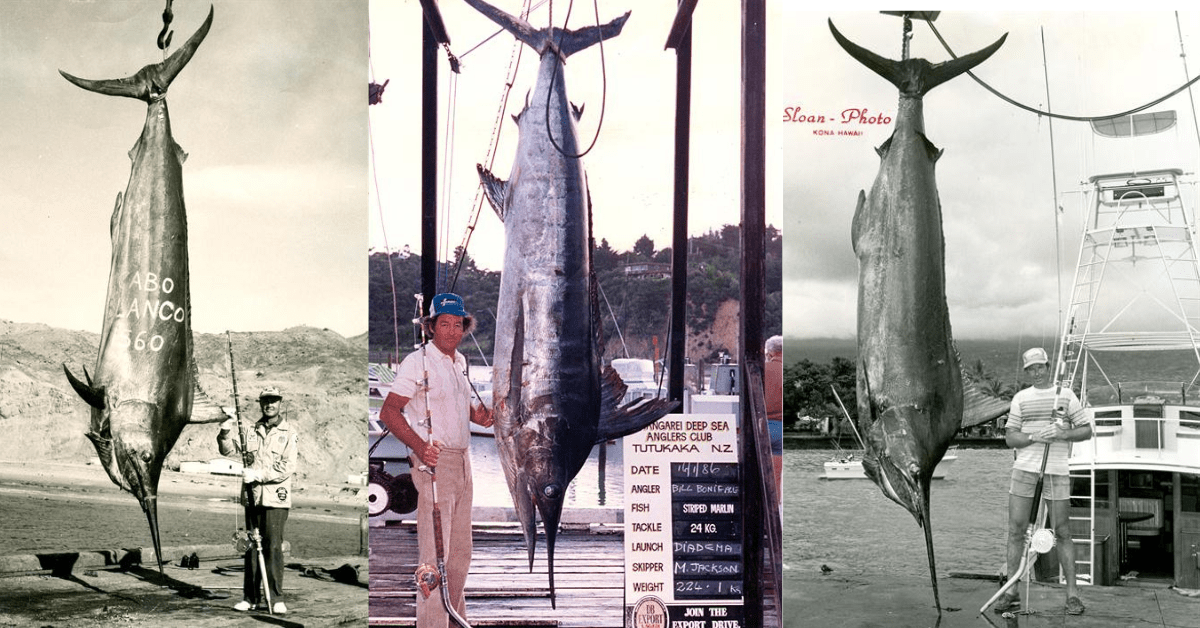 Marlin are the most famous game fish in the world. They are featured in Hemingway’s Old Man and the Sea book as well as several books written by the legendary writer and fisherman Zane Grey.

Some of the biggest marlin ever caught are of true monstrous size and the stories behind some of these world records seem almost unbelievable.

In this article, we look at some world record marlin that have earned their rightful place in the IGFA (International Game Fish Association) record books.

Alfred Glassell, Jr became a celebrity after his record-breaking black marlin catch. Before the days of carbon fiber rods and other strong and advanced fishing technology, Alfred landed his 1560-pound marlin with a Tycoon rod, a Fin Nor 12/0 reel, and an Ashaway line.

After the marlin took a bite from the mackerel trolled behind his boat, Alfred had the fight of his life lasting for close to 2 hours, but he was eventually able to successfully land this giant fish.

Marlin fishing is known for some really big fish but this IGFA all-tackle world record black marlin holds the title of largest black marlin ever caught with a rod and reel. Considering that this record was set in 1953 and the advancements that the fishing industry has seen over recent years, it shows how truly impressive this fish was as no one has been able to challenge this world record for a long time.

As 1992 was a leap year, angler Paulo Amorim used the extra day in February to head out to sea and do some marlin fishing. It was on this trip that he landed his record-breaking Atlantic blue marlin.

At the time of his catch, Paulo was using a Capt. Harry’s rod, a Penn Int’l 80 STW reel, and an Ande line. After weighing the fish, Paulo realized that this fish wasn’t just the largest blue marlin caught on his fishing trip but it was actually the largest Atlantic blue marlin ever caught.

The big blue marlin put up a fight for around 80 minutes before it was finally bought onto the fishing boat and the record was on its way to being broken. To highlight how big this fish actually was, it beat the previous Atlantic blue marlin all-tackle world record by 120 pounds.

When angler Jay de Beaubien set out on his fishing trip aboard the 43-foot Merritt named “No Problem”, he and his captain, Bobby Brown had no idea that one of the largest marlin ever caught was out there waiting for them.

Jay was using an Erskine rod, a Finnor 12/0 reel, and an Erskine line while trolling a silver and blue Kita lure. Once the giant pacific blue marlin had taken a bite, it had nearly emptied the spool within just a few minutes. It went on to have several strong runs and used its impressive size to its advantage. However, after 40 minutes, the fish had been landed and it was official, Jay de Beaubien caught one of the biggest blue marlin of all time.

Since that day, no one has been able to challenge this record and it looks like it will stay with Jay and his 1376-pound monster marlin for a long time to come.

Bill Boniface told newspaper reporters after his catch that he had been trying to land a big striped marlin for almost 15 years. His determination paid off when he eventually caught one which turned out to be the largest striped marlin ever caught.

While striped marlin might not be the largest marlin species, Bill’s big fish does a good job of showing how big they can actually be.

At the time of his catch, Bill was using a Wilkinson Sport fishing rod, a Penn Int’l 50 reel, and an Ande line. He was trolling Kahawai when the large striped marlin took the bait. When he caught the fish weighing 494 pounds, he was with his fishing buddies, all of whom were recreational anglers.

Since Bill’s world record striped marlin catch, it has stood the test of time with no one being able to top his record-breaking fish.

Marlin are such an iconic and beautiful fish. The editor’s son, Daniel, has been practicing drawing marlin and came up with this great illustration of a marlin. I hope you enjoy it!