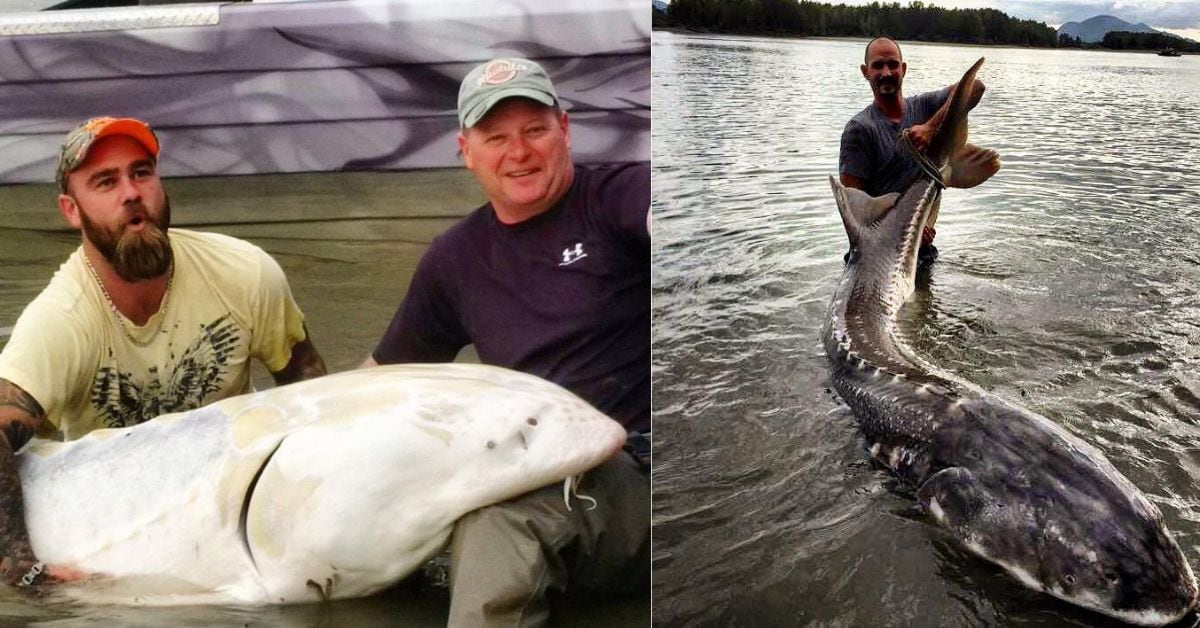 When it comes to sturgeon in North America, the biggest is white sturgeon. These are found in the Lower Fraser River fishery in British Columbia, Canada. They are pretty abundant in this location and there seem to be a large number of extremely big white sturgeon swimming around ready to give anglers the fight of their life.

White sturgeon can also be found in other rivers in the Pacific Northwest but they are in their highest numbers in the Fraser River.

As white sturgeon from the Fraser River are some of the biggest in the world, you’d think that the world record sturgeon would be a white sturgeon caught in Fraser River. However, Fraser River has some very strict rules and regulations that must be followed in order to keep the sturgeon (and other fish in the river) populations in good standing and in good health.

One of these requirements relates to not lifting fish above a certain length out of the water and there are also strict handling methods that must be used too. Obviously, this benefits the fish greatly which is always important but it makes weighing them and accurately measuring them difficult. Without accurate weights and measurements – records can’t be challenged.

The International Game Fish Association (IGFA) will only accept record challenges from fish that have been weighed on approved scales – without being able to take your white sturgeon out of the river, and without the fish being dead, this is almost impossible to achieve.

Any white sturgeon caught in the Fraser River must be released in the right way too so taking it away to be weighed is not an option.

All of these strict guidelines have helped the white sturgeon population to thrive in the river. However, they do may make it difficult to break any records, that’s why the official world record white sturgeon currently stands at 468 pounds. In reality though, the true largest white sturgeon ever caught is actually most likely to be the one landed in July 2012 that was estimated to weigh over 1000 pounds. This was released back into the Fraser River where it was caught.

Back in 2015, Canadian angler Chad Helmer landed a truly remarkable fish while on a fishing trip in the Fraser. Not only was this a giant sturgeon, but it was also an extremely rare albino sturgeon.

White sturgeon are actually more of a gray color than white, so the very white fish Chad landed after a two-and-a-half-hour battle certainly looked different from the usual white sturgeon caught in British Columbia.

After taking photos of his catch (without removing it from the water), Chad let his very memorable fish go. From the photos, it is estimated that the albino sturgeon weighed more than 1000 pounds, it was 11 feet 2 inches long and had a girth of around 5 feet.

Another massive white sturgeon landed in the famous British Columbia river was caught by former NHL goalie Pete Peeters. He was on a fishing trip with fishing guides Sturgeon Slayers. Working with his fishing buddy, Jake Driedger, the estimated close to 900-pound fish was landed after a 25-minute battle.

The fish measured 11 and a half feet in length and had a girth of 4 and a half feet. The measurements and estimated weight have been backed up by another fishing guide from Reel Sturgeon Adventures – Steve Forde. The fish was a virgin sturgeon meaning it had not been caught and tagged before so it really was a first in many ways with this fish. Even the guides said it was the biggest white sturgeon landed that they had ever seen.

As the fish couldn’t actually be weighed, it won’t be recognized as a record challenger by the IGFA (although the fish has been submitted for consideration to Guinness world records), but the photos of the fish and the memory of seeing it and holding it in his hands will be something Pete and his fishing buddies will remember forever.

The official IGFA record for white sturgeon stands at 468 pounds. The record-setting fish was caught by Joey Pallotta on the 9th of July 1983. At the time, Joey was fishing in Benicia, California, USA using a Fenwick rod, a Daiwa reel, and a Stren line baited with shrimp.

Back then, there were no restrictions on sturgeon fishing so Joey was able to call in a friend to help him get the giant fish out of the water. Even with a friend to help, the fish was fighting for more than seven hours.

Once they had it out of the water, the true size of the catch could be fully appreciated. Not only did it weigh 468 pounds but it measured in at 9 feet 6 inches long.

Joey Pallotta’s world record will likely remain unbroken for a while. Not only because of the sheer size of the fish but also because of the restrictions placed on sturgeon fishing in recent times.

What is the Biggest Sturgeon Species?

Sturgeon are the largest freshwater fish in the world. The biggest species of sturgeon is the Beluga sturgeon found in Russia.

How do You Fish For Sturgeon

If you want to increase your chances of landing a massive white sturgeon, fishing in British Columbia between March and November will likely be your best bet.

You will need to be patient if you want to catch some of the largest sturgeon out there. You may feel a few small pulls before the fish actually grab your bait and run with it. A common mistake is setting your hook too early so patience is key with these giant fish.

If you are boat fishing, keeping your boat as still as possible will also help encourage the giant white sturgeon to approach and take your bait.

Then prepare yourself for a big fight, these fish can take a long time to land so make sure you’re ready when the time comes.