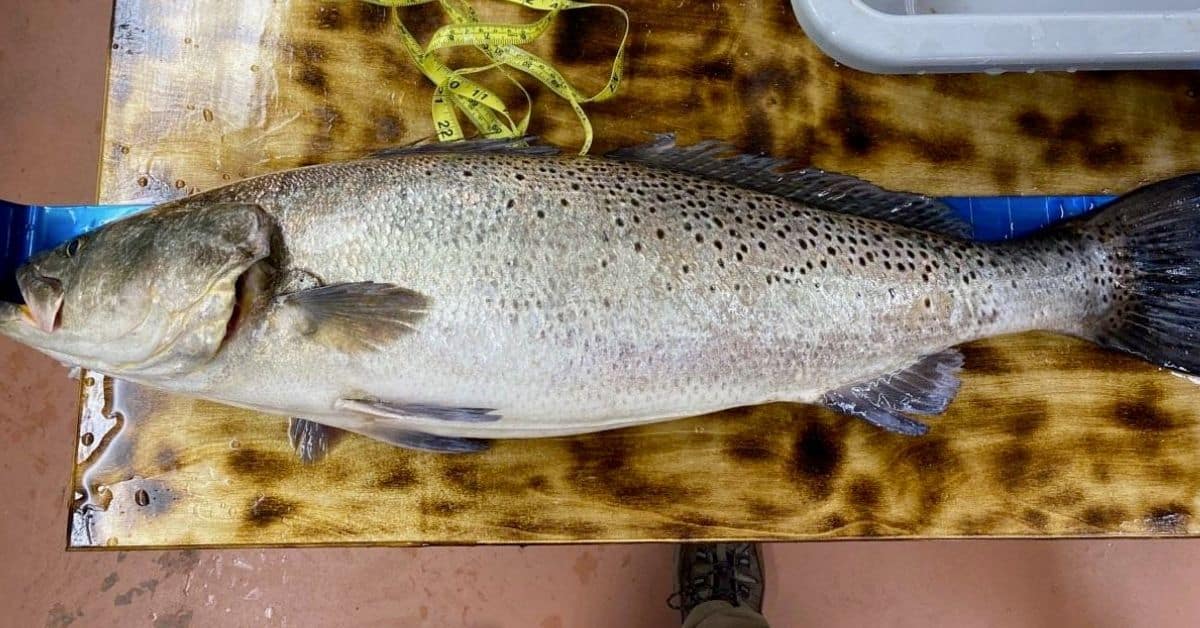 Speckled Trout is a great gamefish that is actually known by a whole load of different names. If you have ever heard an angler talking about Gator Trout, Winter Trout, Salmon Trout, Black Trout, Specks, Yellow Mouths, Spotted Weakfish, or Paper Mouths – the chances are, they were referring to Speckled Trout.

They are commonly found in the Gulf of Mexico and the Atlantic Ocean. This makes Florida and surrounding states a great place to find this fish in reasonably large numbers.

While the average size for males is around 19 inches, females tend to be a bit longer at around 25 inches. Weight wise, most weigh in at around two to three pounds but that doesn’t mean much bigger fish aren’t out there.

In this article, we take a look at the biggest Speckled Trout ever caught and, if you aren’t yet aware of how big it was, you’d probably not be able to guess how big it actually was based on the average size of these fish.

The International Game Fish Assoociation (IGFA) all-tackle world record for Speckled Trout is held by Craig Carson for his catch on 11th May 1995.

Craig was fishing in Fort Pierce, Florida when he landed his record-breaking trout that weighed in at an extremely impressive 17 lb 7 oz (7.92 kg). He used casting with a Lamiglas rod, Trilene line, and a Zara spook lure.

The story behind the catch is somewhat surprising and almost unbelievable at times but it certainly did happen! Craig only caught one fish on his entire four-day fishing trip and it just so happened to be the monster that set a new world record. Amazingly, he didn’t realize the impact his catch would have on the fishing world at the time, in fact, he ended up eating it!

Luckily, before he had eaten it, his curiosity of how much it weighed led him to have the fish weighed at a fish and meat store near to where he lived (all of the local tackle shops were closed and he didn’t want to wait until the next day).

Craig was a courier driver for UPS and one of his regular pick-ups was at Fish Finder magazine. He showed one of the people there a photo he had of himself with the fish and they told him it could be a record breaker. As Craig had eaten the fish and discarded the remains, he was fortunate that there was enough evidence and witnesses to verify his catch.

It took Craig just 15 minutes to land the monster trout but his record has stood for over a decade now and it certainly appears to be pretty much unbreakable.

Amanda Bottenberg sight fished with a fly rod, a nine-pound world record Speckled Trout. She landed the record trout while fishing the north end of the Indian River Lagoon.

This seems to be something of a meeting point for some truly big fish and this huge trout is testament to that.

Amanda earned her world record by landing the nine-pounder on six-pound tippet.

The current Texas state record for Speckled Trout stands at 16 pounds and is held by Carl “Bud” Rowland. He caught his record trout in Lower Laguna Madre on May 23rd 2002.

The previous state record had stood since 1996 and was for a 13-pound Gator.

On February 9th 2002, Todd Spangler caught a 12-pound 8-ounce Speckled Trout in the lower Neuse River in Pamlico County. This beat the previous state record of 12 pounds 4 ounces which had stood since 1961!

The Alabama state record has stood since 1980 when Willford Ducherme landed his 12lb 4oz fish.

One interesting world record recognized by the IGFA is the world record for length of Speckled Trout. This is currently held by Luke Ledbetter for his 33.86-inch (86cm) catch he landed in Melbourne Beach, Florida on 1st June 2015.

Ledbetter released the big trout after photographing it and collecting enough evidence to submit his record claim. The large trout actually beat the previous record by around 4 inches (10cm) so Luke definitely released a monster spotted seatrout back out into the wild.

All About Speckled Trout

The Speckled Trout is the common name given to the cynoscion nebulous. It is actually known by several names such as Spotted Seatrout, Spotted Weakfish, Yellow Mouth, and Paper Mouth.

It’s worth noting that when Speckled Trout get to big size (usually around seven pounds), they tend to be referred to as Gator Trout.

This species of fish are common in the Gulf of Mexico and the Atlantic Ocean, particularly along the coasts of the South Eastern states such as Texas, Louisiana, Alabama, Mississippi, Georgia, and Florida, although they can also be found in North and South Carolina as well as Virgina.

Although Speckled Trout weighing up to around five pounds are fairly common, their average size is one to two pounds.

Anything between eight and ten pounds is pretty rare but certainly not impossible if you look at some of the records that currently stand (including the all-tackle world record).

Speckled Trout tend to prefer clear water, particularly in low-light conditions. They also tend to be in similar areas so if you catch one big fish, the chances are, there will be others fairly closeby.

They can usually be found in shallow waters in winter and deeper, moving water during the summer.

Pretty much all Speckled Trout are caught with a hook and line. They are a very popular fish for recreational anglers and, as they reproduce so well, they are a great choice for sustainable fishing.

Live bait tends to be very effective with shrimp, pinfish, and greenbacks being popular choices.