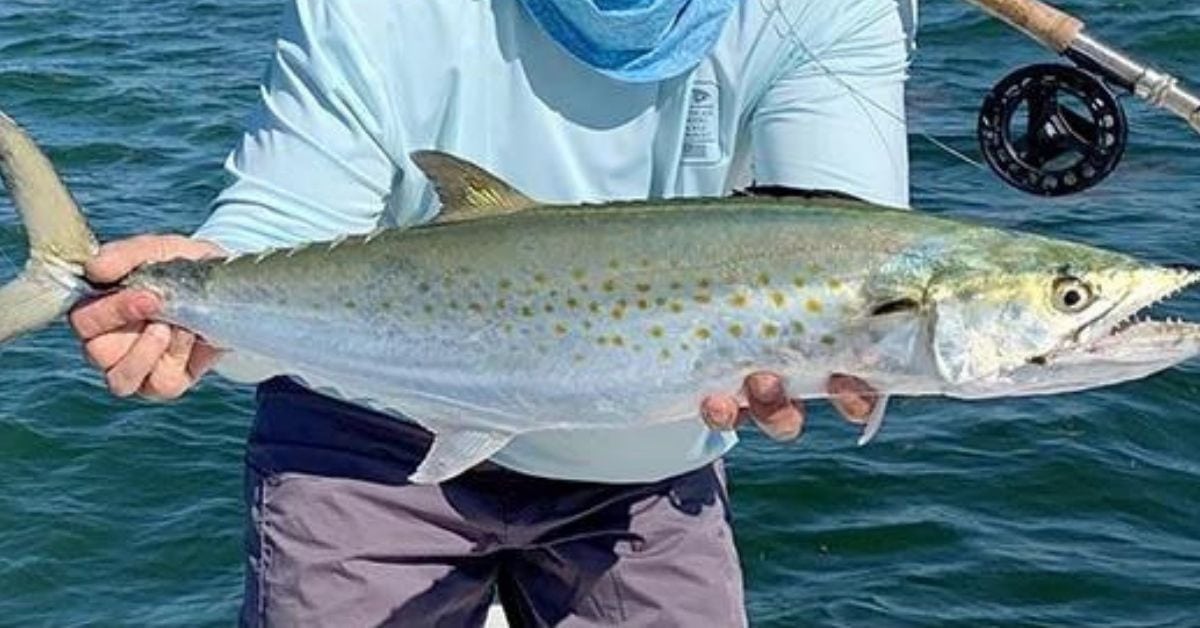 Since 4th November 1987, the world record for the biggest Spanish Mackerel ever caught has stood. This is hugely impressive considering how common it is for world records to be set and broken nowadays.

Spanish Mackerel are considered a relatively small fish with most weighing in somewhere between one and three pounds. That isn’t to say that bigger fish of this species aren’t out there though and the all-tackle world record shows that this is certainly the case.

Robert (known as Bob) successfully landed his record-breaking catch in the Ocracoke Inlet, North Carolina back in 1987. Sadly Bob died in 2011, but it is a fitting tribute to the true scale of his catch that his record still stood when he died, and still stands over three decades after he caught the giant fish.

To land his monster catch, Bob used trolling and a Sea Witch with Albacore bait. He also used a Kunnan rod and a Shimano reel.

The current IGFA fly fishing world record for Spanish Mackerel is held by angler Dennis Triana for his 25.98 – inch catch in December 2021.

Dennis is something of a world record king as he holds more than 100 of them!

One of the recent additions to his impressive record haul was this mammoth catch on 3rd December 2021. The world record mackerel was caught in Florida Bay, Florida using a Clouser fly, Ande rod, and a Sage reel.

An interesting component of this story is that the fly used was actually purchased by Dennis Triana at a yard sale just before he set out on his fishing trip. The fly was actually tied at some point during the 80s but it obviously still had some use left in it as the record-breaking Spanish Mackerel couldn’t resist it.

It took Dennis five minutes to land the fish and, once he had obtained all the relevant evidence he needed for his record, he released it back into the water.

On 21st March 1999, angler Ronald Skelton set out on a fishing trip on the St. Lucie River, Stuart, Florida. It was there that he caught the record Spanish Mackerel in the 12lb line class.

The fish he caught weighed in at 10 pounds 8 ounces, was 33.38 inches long, and had an impressive girth of 16 inches.

Ronald used casting with a Shimano rod and reel alongside an Ande line and a gold spoon lure.

He caught the record-breaker in Fort Pierce, Florida and no one has been able to beat his 12 pounds 0 ounces (5.44 kg) catch since.

Spanish Mackerel is commonly found in the waters off the coast of North America and the Caribbean. They can be seen off the Atlantic coast from as far north as Nova Scotia all the way down to Florida along the Gulf of Mexico.

Florida is where they tend to be most abundant so fishing in these waters can lead to successful fishing trips.

They can also be found off the north coast of Cuba.

Spanish Mackerel migrate over large distances at different times of the year.

In the Atlantic Ocean, they follow the coastline in a northerly direction during summer before heading back down south to Florida during fall and winter.

They are fast-growing fish that can live for up to around 12 years. They can reproduce from around 2 years of age so they have plenty of time to keep population numbers up.

Spanish Mackerel are speedy fish and enjoy chasing fast-moving things. That’s why casting can be effective as long as you reel very quickly.

Alternatively trolling can also be effective at speeds of around five to seven miles per hour.

Atlantic Mackerel populations are currently above the targeted number. This wasn’t always the case though as, before the 1980s, Spanish Mackerel were fished without regulation. This led to populations falling below target levels.

Since regulations have been implemented, the species has recovered very well and is now of least concern to fishing regulators.

Spanish Mackerel are one of the richest sources for omega 3 fatty acids of any fish in the ocean. This makes them a healthy choice to add to your diet.

The flavor is mild and a lot less “fishy” than other fish meats.

It can be cooked in a number of ways and is considered a high-quality fish to consume.