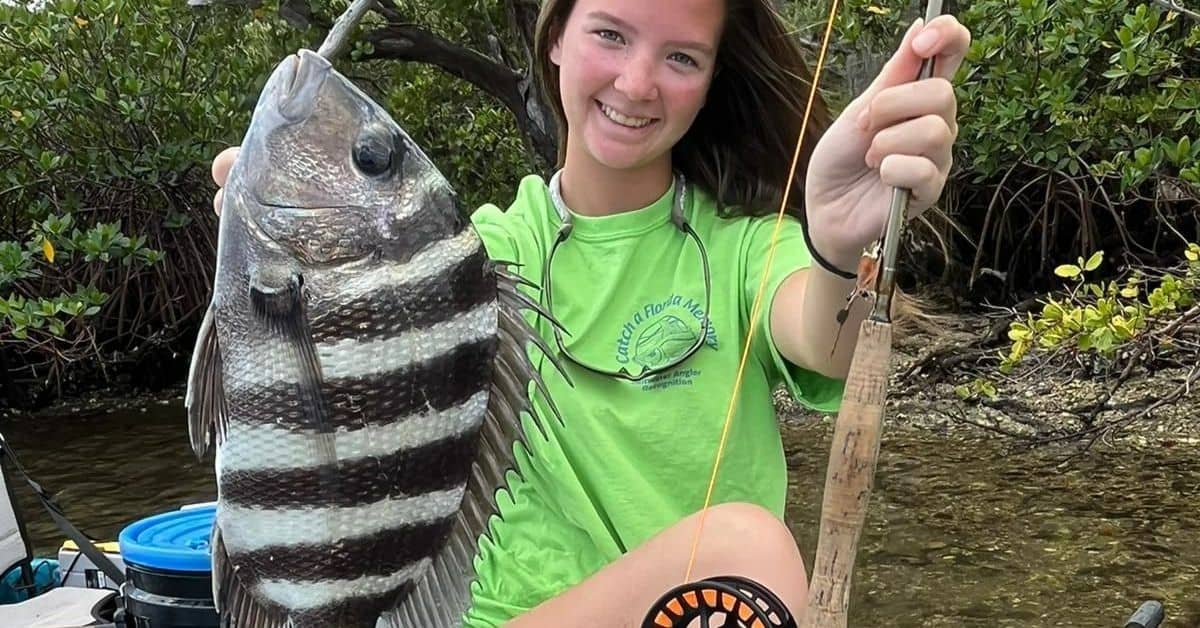 World records seem to be broken fairly consistently with very few standing the test of time. One world record that seems to be somewhat unbreakable in recent times is the world record Sheepshead caught by Wayne Desselle in 1982.

Since capturing the record-breaking 21 lb 4 oz Sheepshead fish, Wayne’s record has stood with no challenges. In this article, we look at his record-breaking catch in more detail as well as other Sheepshead records and the fish species itself.

On 16th April 1982, Wayne Desselle landed the largest Sheepshead ever caught. The fish weighed in at 21 lb 4 oz (9.63kg) and was caught in New Orleans, Louisiana.

Wayne used river shrimp as bait and was able to land the record-breaking fish.

As the record has stood for so long, there isn’t a huge amount of information available about the story behind the catch, but the fact that Wayne has held the record for several decades shows how impressive his catch actually was.

As well as being the all-tackle record, Wayne’s Sheepshead is also the Louisiana state record. Despite not always coming close to the monstrous fish that Wayne landed, there are still some very impressive state record Sheepshead catches out there.

Substantial numbers of Sheepshead are caught every year in Florida so it is pretty surprising that the Florida state record of 15lb 2 ozs has stood since 1981.

E. Lechler is the angler who managed to land the biggest Sheepshead ever caught in Florida and it looks like no one will be breaking the record any time soon.

A more recently set state record is the one set in Georgia by Ralph White who landed a Sheepshead in 2002 that weighed in at 14 lbs 14 ozs. This is actually one of the smallest record-setting Sheepshead but it still holds the title of largest Sheepshead ever caught in the state of Georgia.

Since 1999, Chris Robbins has held the North Carolina state record with his 19lbs 4 oz Sheepshead caught off the Oregon inlet.

When Jimmy Widener went fishing off Mt Pleasant in 2008, he probably didn’t realize that he was about to catch a new state record fish. The Sheepshead he caught weighed in at 16 lbs 6 ozs.

On October 17th, 2002, Wayne Gilstrap headed out on a fishing trip on the Lower Laguna Madre. It was there that he caught the 15.25-pound Sheepshead that set the new state record for Texas.

The giant Sheepshead Arun landed was 30.5 inches long, had an impressive girth of 27 inches, and weighed in at a huge 20 pounds 12 ounces.

With less than a pound difference between this Sheepshead and the International Game Fish Association all-tackle record, Arun was very close to landing the world record Sheepshead.

Quentin actually caught his world record Sheepshead on June 2nd, 2019. The record he broke had stood for eight years but Quentin’s 16.8 pound Sheepshead was more than enough to push the former 15-pound record-holder into the second spot.

When speaking about his world record catch, Quentin said the school of Sheepshead he saw was full of big fish. He estimated that none were under seven pounds and there were plenty that appeared to be over 10 pounds too.

After waiting to see how big some of these fish got, Quentin saw a giant Sheepshead heading straight for him. He recalled that it seemed completely unfazed by Quentin and swam at him as if he wasn’t even there. It was this fish that would end up being the record-breaking catch.

The International Underwater Spearfishing Association is responsible for officiating world records for spearfishing. Once they confirmed this monster was indeed a world record breaker, Quentin got his name in the record books and it certainly appears he will be there for a while!

Sheepshead are commonly found in the western Atlantic Ocean from the coastal waters of Nova Scotia in Canada all the way through to the Gulf of Mexico. Sheepshead are most abundant off Southwest Florida.

They can also be found on the Caribbean coasts of Central and South America although they are not as common.

Most Sheepshead grow to around one to eight pounds in weight and around 14 – 18 inches in length. That being said, some do grow a lot bigger than this with a potential maximum size expected to be somewhere around 22 pounds and a little under 30 inches.

These fish can live for more than 20 years and reach maturity at around two years of age.

This fish has some interesting eating habits – in particular, they seem to eat pretty much anything depending on the size of the fish. Crustaceans and small fish are commonly eaten by larger Sheepshead while plants and algae are also consumed.

They tend to be found around structures such as rock piles, dock and bridge pilings, and buoys as this is where barnacles tend to grow and their prey animals can be found.

The tides play a big part in the lives of Sheepshead and high tide is when they are most likely to be active and successfully landed.

As Sheepshead have quite a varied diet, they actually make for a very nutritious meal.

With a sweet taste that is said to be somewhat similar to shellfish, Sheepshead is flakey and tender so is a great choice of fish to eat.