If you are a big Yeti fan like me, then you will know how much of a big deal the new Yeti Roadie 24 (available here) is.

Its predecessor, the Yeti Roadie 20, was already an awesome cooler and the Roadie 24 takes this awesomeness to a whole other level.

In this article, we look at some of the key differences between the older Roadie 20 and the new Roadie 24, as well as give you our full review of why we think the Yeti Roadie 24 should be on your outdoor kit wish list. 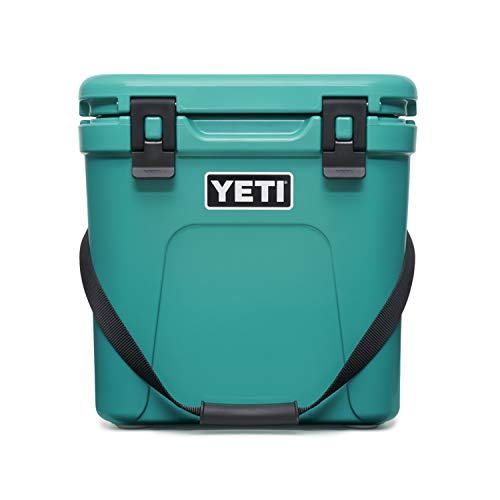 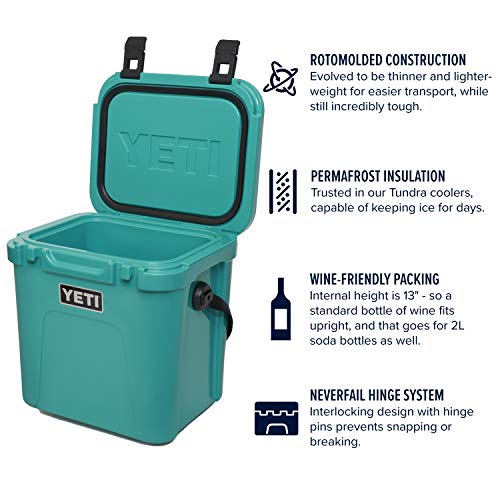 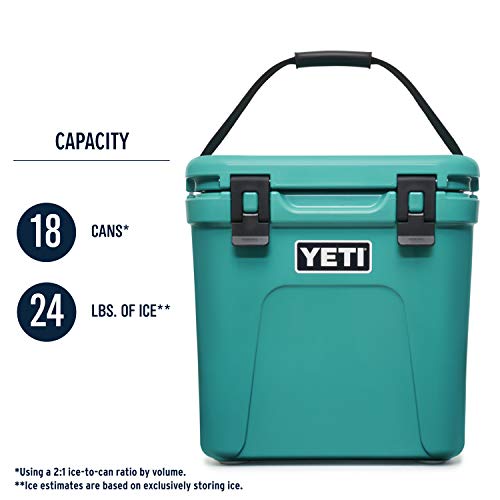 The Yeti Roadie 24 is one of Yeti's smaller capacity coolers but it is still just as tough and as durable as its larger counterparts.

It can hold up to 18 cans of your favorite beer or an impressive 24 pounds of ice on its own.

Despite being 10 percent lighter than the previous model, it can hold 20% more and is slim enough to fit behind the front seats in your car, meaning you are never far away from an ice-cold beverage whenever you need it.

Buy direct from Yeti and saveCheck latest price on Amazon

Key Changes From the Previous Roadie

Yeti is known for making high-quality coolers, so with a newer version of an already incredible cooler; you can be sure that the changes are for the better.

The first of these changes is the weight of the cooler itself. The Yeti Roadie 24 is 10 percent lighter than the previous model, weighing in at 12.8 pounds compared to the previous 15 pounds.

While this may not sound like a big difference – when you are heading out into the wild, every bit of weight you can save is a very good thing.

Despite the popularity of the Yeti Roadie 20, there were still a few issues that bothered some long-term Yeti users.

One of the issues was the metal carry handle. Some users said this made the cooler uncomfortable to carry over anything other than a short distance, and it would occasionally get in the way while they were trying to open the cooler.

Yeti listened to this feedback, and the metal handle is not a feature on the Yeti Roadie 24. Instead, it has been replaced by the new HeftyHauler Strap.

This is a flexible nylon strap that is much more comfortable to hold and carry the cooler with.

It also has a rubber grip at the highest point of the strap to make sure your hands stay comfortable with a firm grip on your travels in the wild.

Another added bonus caused by the change from a metal handle to a nylon strap is that the overall weight of the cooler drops making it lighter as well as more comfortable to carry.

As already mentioned earlier, the Yeti Roadie 24 can comfortably hold 18 cans of beer along with the appropriate amount of ice or around 24 pounds of ice if nothing else is being carried.

This is an increased carrying capacity compared to the Roadie 20, but Yeti has gone further than just increasing the load-bearing capabilities.

Yeti has made the internal space of the cooler more versatile and even more practical than before.

As the new Yeti Roadie 24 is taller than the Roadie 20, carrying wine bottles in an upright position is now possible. In the previous model, these needed to be laid down, which not only risked spillages but also took up much cooler space than they needed to.

If you want to get even more practicality from your Yeti Roadie, you can purchase the Yeti Dry Goods Basket (available here) separately which allows you to carry a few extra items while still leaving plenty of storage space underneath for more ice to keep your drinks cold.

Yeti coolers are known for their ice retaining abilities, and the Yeti Roadie 24 is more than capable of reaching users’ high ice retention expectations.

The basic science behind the Yeti Roadie’s ability to hold ice for so long is that it is roto-molded. This is a very effective manufacturing method that makes sure the thickness of the cooler is even and consistent across its entire surface. The result of roto-molding is a very tough and durable cooler that has no weak points and is virtually indestructible.

On top of that, the Yeti Roadie 24 also has pressure-injected polyurethane foam insulation and a freezer-grade seal on the lid. All in all, it is designed to hold ice for a long time!

Yeti recommends that you pre-chill your Roadie before adding ice to get the highest levels of ice retention. If you follow this recommendation, ice retention of two days is pretty comfortable.

If you want to carry food in your Yeti Roadie 24, then you may want a drier cooling environment inside your cooler. Ice packs, ice blocks, or gel cooling blocks could be used instead of cubed ice to keep things cold while you enjoy your outdoor adventure.

Our overall Yeti Roadie 24 review is that it is an awesome cooler, and we love it!

The original Yeti Roadie 20, which is the predecessor of the Roadie 24, was already one of the most popular Yeti coolers, and this new model will very likely follow in its footsteps.

With the new nylon handle, increased height, lighter weight, and greater capacity, the Yeti Roadie 24 is one Yeti cooler that should definitely be on every outdoor lover’s wish list. 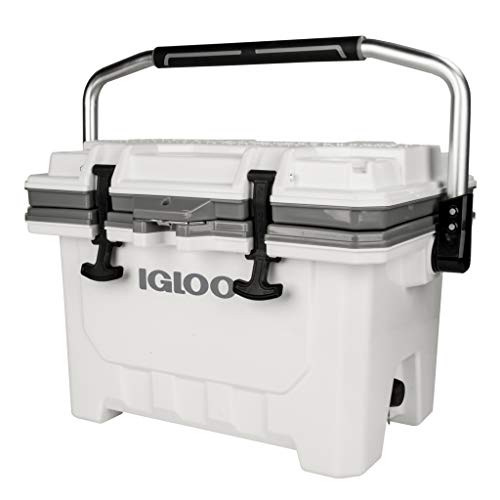 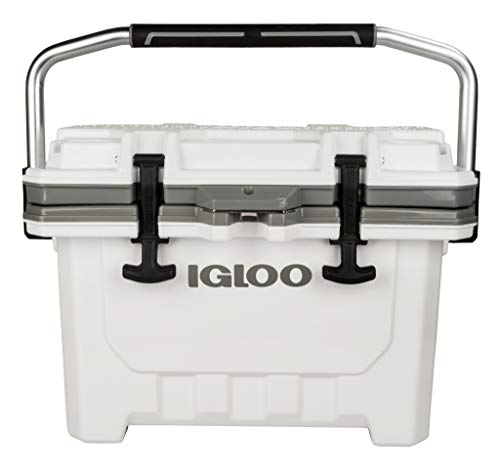 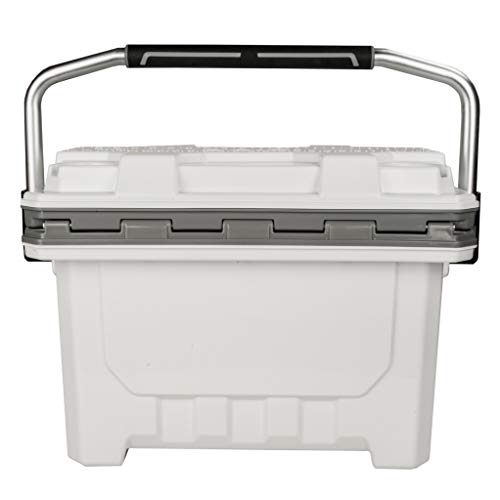 The Igloo IMX - 24 QT is quite a bit cheaper than the Yeti Roadie 24. That being said, it is not roto-molded, and its look is less pleasing than that of the Roadie.

It does perform reasonably well as a cooler so it could be a more budget-friendly option for you.

Buy direct from Igloo and saveCheck latest price on Amazon 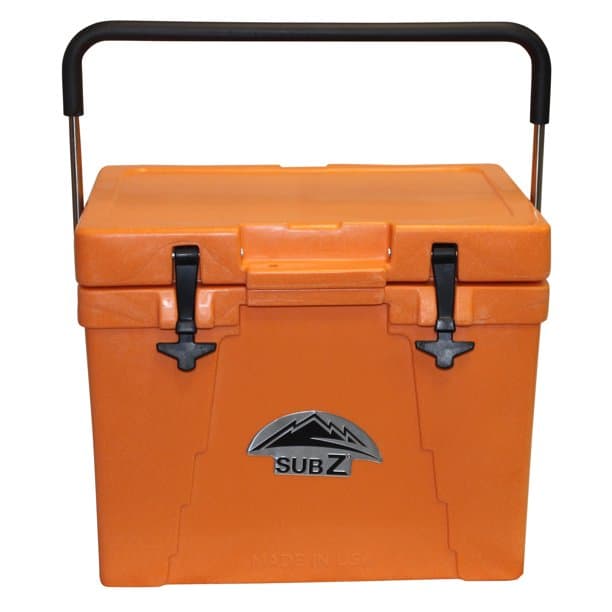 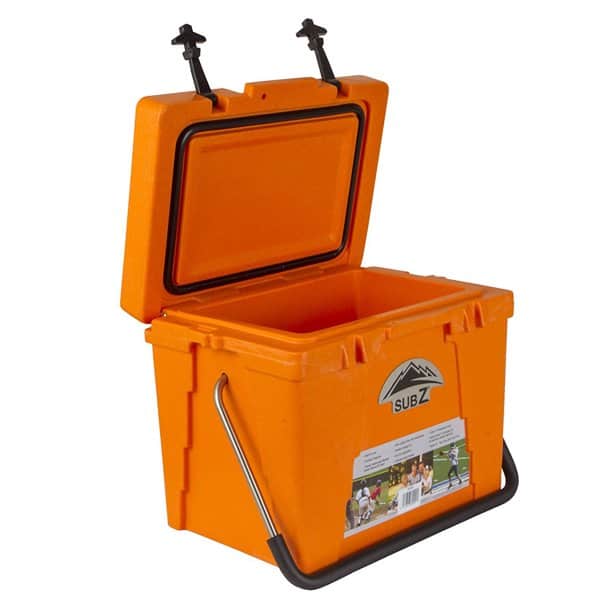 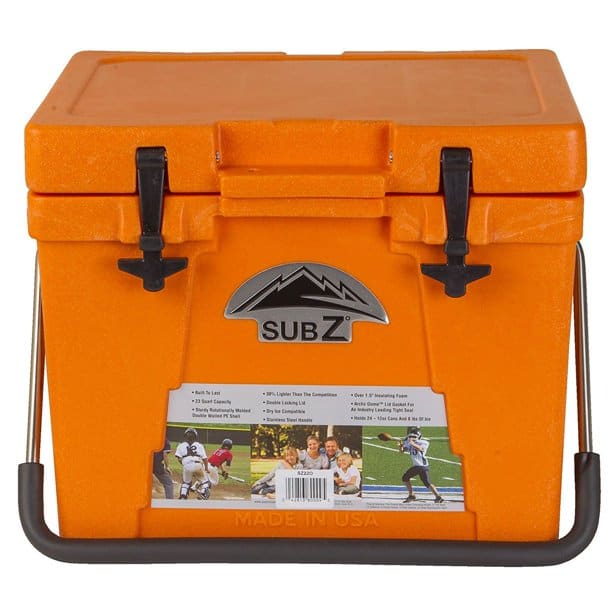 There are a couple of similarities between the Nash Sub-Z - 23 QT and the Yeti Roadie 24. The main one is that both are roto-molded making both of them a decent choice if you want a very rugged cooler.

This one, again, doesn't look as pleasing as the Roadie but performs well in the wild. 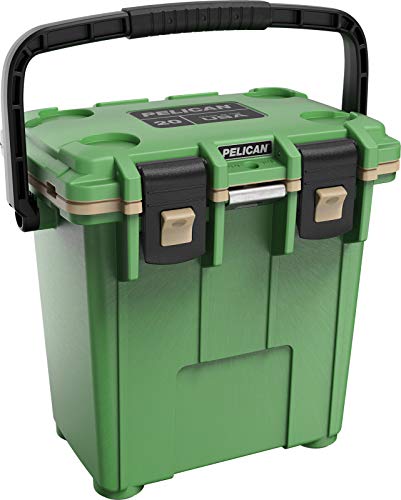 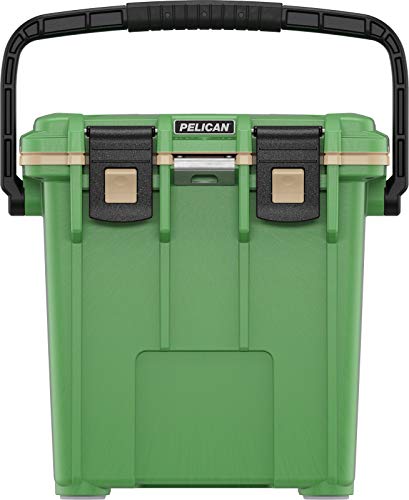 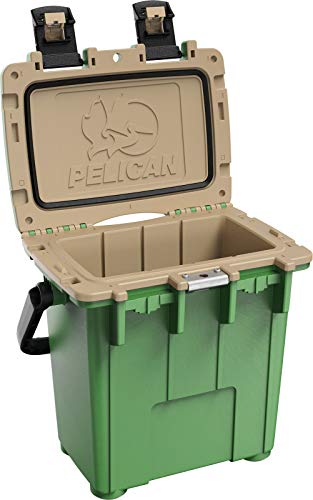 The shape and the ability to carry bottles of wine upright make the Pelican Elite - 20 QT a pretty close competitor for the Yeti Roadie 24 Cooler.

It's also a good amount cheaper than the Yeti, although its biggest downfall is that it isn't a Yeti cooler!

Buy direct from Pelican and saveCheck latest price on Amazon 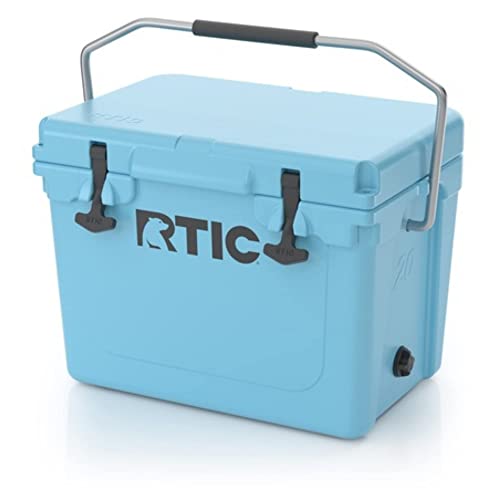 The RTIC 20 QT Hard Cooler looks similar to the original Yeti Roadie 20 as it has a metal carry handle and thick insulated walls.

One feature it does have that the Roadie 24 doesn't is a drain plug. A drain plug can be useful for draining ice water or spillages from the cooler.

Buy direct from RTIC and saveCheck latest price on Amazon 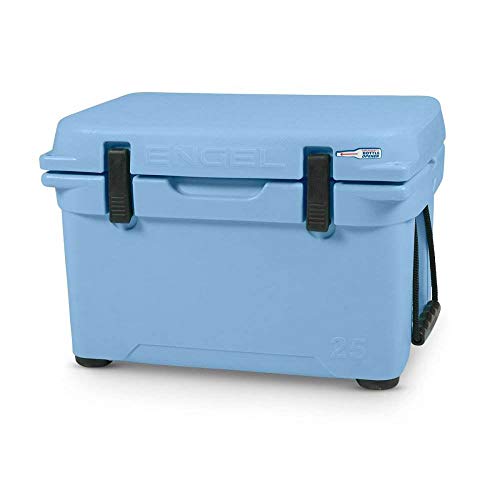 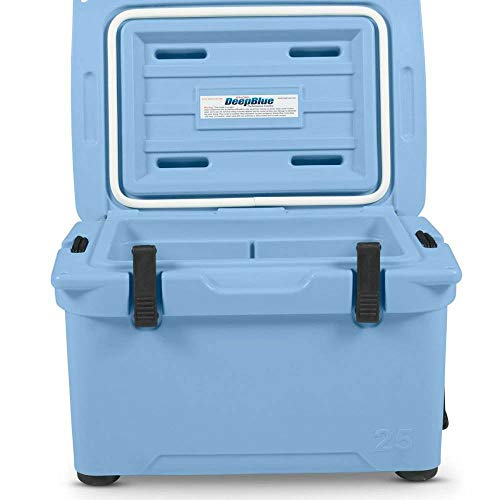 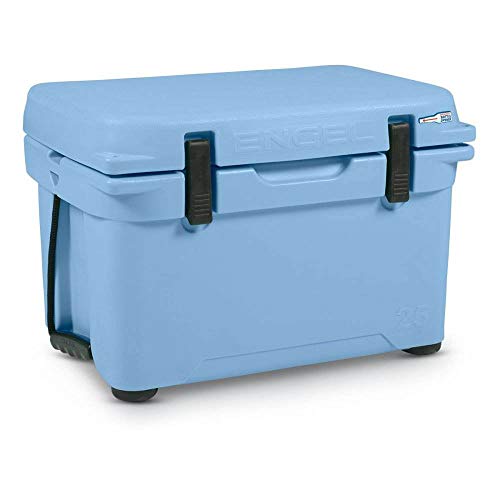 The Engel 25 High-Performance Cooler is IGBC-certified as bear-resistant. On overnight camping trips in bear country, this could be a very useful feature.

It has a 21-quart capacity and it has good levels of ice-retention capability so it can keep things cool for a long time.

The Yeti Roadie 24 Cooler is one impressive cooler.

Like the Roadie 20, it fills the gap between the soft Yeti coolers which are smaller with lower capacities, and the hard coolers which can get up to some very large sizes (like the Yeti Tundra line).

The Roadie 24 is the smallest of the Yeti hard coolers, so it seems to be very good at combining the best features of the soft Yeti coolers and the larger hard coolers too, without taking up too much room in your kit.

It has tie-down slots and new latches which can be opened easily for one-handed cooler access making it a very good upgrade from the original Roadie cooler.

The Yeti Roadie 24 – an outstanding cooler!