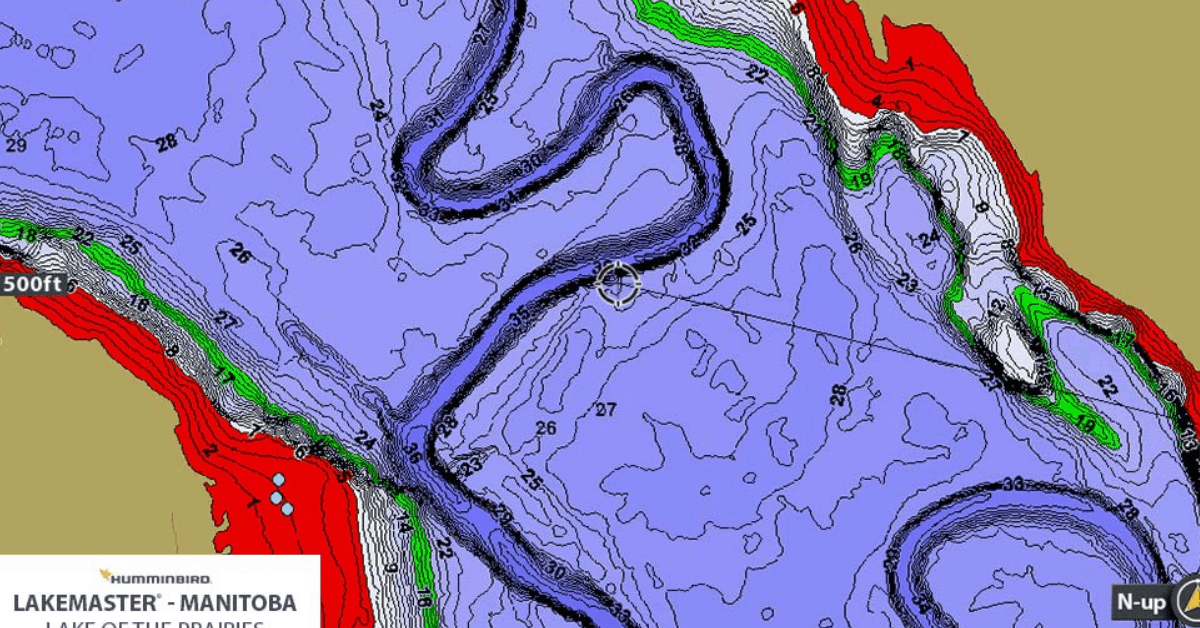 Lakemaster and Navionics GPS cards for sonar/GPS units are two of the most popular GPS mapping cards available, especially for inland fishing around the United States and Canada, with charts for states, regions, or for large individual lakes and rivers.

Let’s compare Navionics vs Lakemaster and see the pros and cons of both GPS mapping cards.

The compatibility between both Navionics and Lakemaster is quite different. Lakemaster map cards are only compatible with Humminbird units. This might be due to some agreement between the two companies, but with Humminbird being one of the top, if not the #1 sonar unit brand used, it works for Lakemaster.

Navionics, on the other hand, works with many different brands of sonar units on the market, which is a plus for any angler who doesn’t use Humminbird sonar units.

Navionics cards will work with Lowrance, Simrad, Raymarine, and even Humminbird units.

The quality of both Lakemaster and Navionics is very good. On a personal level I prefer Lakemaster over Navionics, but other anglers might think the opposite, and it comes down to personal preference mostly. I would consider them to be a tie in the ease of viewing department.

You can also custom tailor the maps, with the option to change the contour line settings from 1 foot, 5 foot, 10 foot, increments, and anything in between.

You can also highlight certain depths to help them stand out. If you want to view everything under or over 5 feet in depth, you can highlight 5 feet or less in one color like red and have an easy view of these areas.

Navionics and Lakemaster mapping sonar charts feature high-quality hydrographic maps at the end of the day, and you can’t go wrong with either one if you have a suitable platform in this aspect.

Lakemaster and Navionics are pretty close when it comes to coverage. Most popular regions and bodies of water will show that both equally have superb mapping and coverage, but the small off the beaten path lakes might not have the high definition and detail contouring that other lakes will have, and the difference could be drastic with contours every 10 feet.

Most of the time, when on a smaller lake, this isn’t an issue, as it’s easy enough for anglers to cruise around and find spots with sonar and mark them with waypoints, and in areas like Wisconsin and Minnesota, even smaller sized lakes can have high-quality maps and the coverage might only be lacking on small remote lakes with no boat access, it really comes down to being an almost non-issue with both Navionics and Lakemaster SD maps.

You can also custom tailor the maps, with the option to change the contour line settings from 1 foot, 5 foot, 10 foot, increments, and anything in between.

You can also highlight certain depths to help features and detail stand out. If you want to view everything under or over 5 feet in depth, you can highlight 5 feet or less in one color like red and have an easy and accurate view of these areas.

As mentioned above, both chip offerings offer a shallow water highlight option to focus on a certain depth range. These options are great for finding areas or structure. This option is also great as a safety feature, so you know where any shallow areas like reefs or sandbars are located that may potentially damage your boat or your motors’ lower unit.

Both Lakemaster maps and Navionics mapping cards have a water level adjustment feature included. While something I don’t take advantage of this depth range feature personally, this can be convenient on reservoirs or impoundments with a high fluctuation of water.

Navionics chips and Lakemaster mapping chips both have satellite overlay features. Both of these features are only available with the Navionics platinum and the Lakemaster Plus cards.

These cards offer a few extra features compared to the standard mapping cards, and while they are more expensive, the added cost is fairly small for the added features.

Access to updating maps is a topic where there is a bit of contrast between the two cards. Navionics offers updates on maps for a year, while Lake master does not feature any updates.

If updates are important to you, Navionics will clearly shine here, but if you are like me and run Humminbird units and fish the same inland lakes that don’t really change (structure and depths remain the same so the maps remain accurate), having the Navionics updates is not really an issue.

Units that allow for the charting of lake maps have been a game-changer for fishing. Both Lakemaster and Navionics feature chart plotting.

As mentioned earlier, some lakes might not have highly detailed charts due to simply being off the beaten path. Some lakes just weren’t mapped in great detail by the Lakemaster and Navionics companies so the lake maps don’t exist, but with the chart plotting feature, that’s not a concern, as this feature allows you to make your own accurate maps of favorite lakes yourself if they don’t have charts on the chip for your region.

This means any lake can have highly detailed charts with a high level of accuracy, and not just the ones that have been mapped by the companies, allowing you to find small fishing holding areas and structure that you may not have found otherwise.

While the pricing of both is fairly close, Lakemaster is cheaper than Navionics, but you also need to keep in mind that Lakemaster only works with Humminbird units, while Navionics works with multiple different units.

The difference in price typically ranges around 10-30 dollars between the Lakemaster Plus and the standard Navionics cards. Navionics Platinum, on the other hand, can be quite a bit more expensive, and regional mapping packages can cost over $300, but if you fish off-shore or a larger number of lakes spread over multiple states, or the Great Lakes, this might be the best option.

If you’re still shopping for a fish finder to use the charts in, it would be a good idea to keep the prices in mind and see if the extra cost is worth it to go with the Navionics platinum map over the Lakemaster plus cards.

Will Navionics work on Humminbird devices?

Navionics Map chips will work with Humminbird sonar units without any issue. That’s one of the things that really makes Navionics stand out among other mapping cards on the market. These are compatible with a wide range of brands.

You can even use the base version of Navionics without having a fish finder. For ten dollars, you can buy the Navionics app on the app store for your smartphone and get access to pretty accurate mapping. Even though I have Lakemaster chips in my sonar units, I also have the Navionics app, and if I encounter a lake that has poor charts on the Lakemaster chip, I can check to see if the Navionics charts app has it charted, and sometimes I get lucky and it will have a map.

Does LakeMaster work with Lowrance devices?

LakeMaster SD cards will not work with Lowrance devices. Lakemaster will only work with Humminbird devices like the Humminbird Helix and others. This is due to both Humminbird and Lakemaster being owned by the same company, Johnson Outdoors.

This is also a major consideration if you are looking to buy and update the fish finders in your boat. Some anglers love Lowrance, and some love Humminbird. I’m personally a Humminbird guy, so the compatibility issues of the Lakemaster cards aren’t a huge deal to me. But other anglers may want more options.

Both the Lakemaster and Navionics mapping chips excel at giving anglers great HD map visuals and accurate depth charts. The difference between the two really boils down to the fish finder unit that you use. A detailed map of the body of water you want to fish can drastically cut down on time needed to learn the lake, or it could help you find new spots on your favorite lake. Ice fishing has also started seeing both charting options used in ice fishing specific sonar units, so be sure to explore that option if you do hard water fishing in the winter months.