How to Skin a Fish: Step by Step Instructions 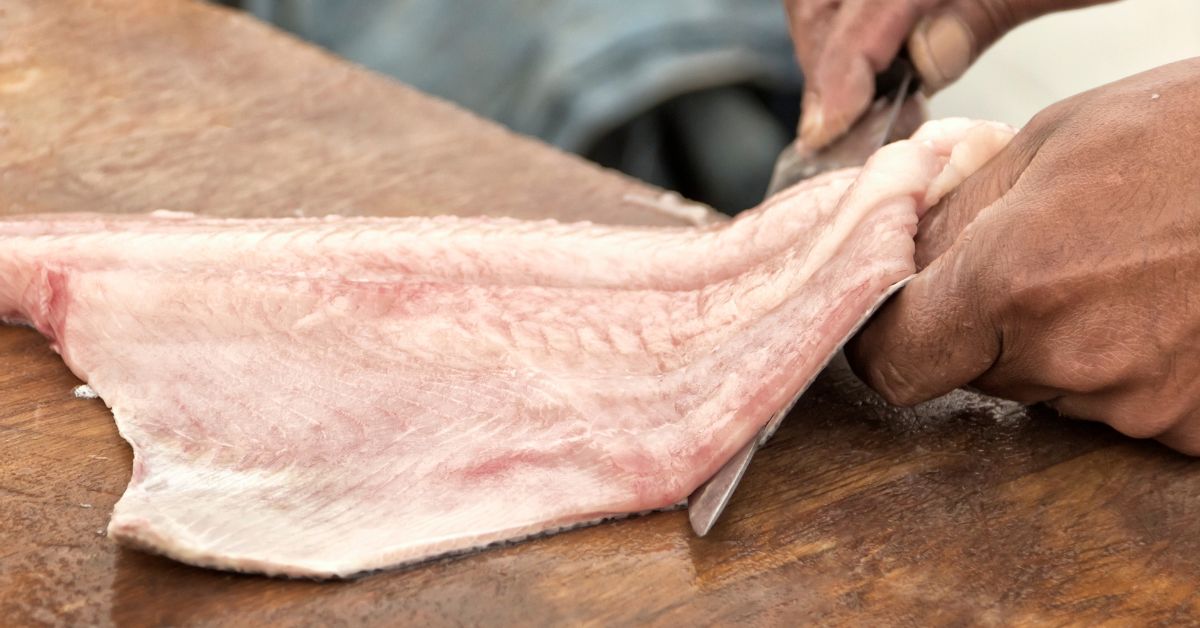 How to Skin a Fish: Step by Step Instructions

Knowing how to skin a fish can be a very practical skill. Even if you aren’t an avid angler, being able to remove the skin from a fillet purchased in the grocery store can allow you to bread and bake that fillet without having the skin get soggy and unappealing.

Removing a fish skin is a relatively simple process, and can quickly become second nature once you do it a few times. By following the below steps, you will soon be skinning your own fish catch as well as fish fillets from the grocery store.

How to Skin a Fish

Before you begin, ensure your cutting board is thoroughly cleaned and ready to be used. You will also want to have a thin bladed knife handy and ready to use. A salmon knife, boning knife, or a chef’s knife can be suitable, as are any number of specific fillet blades.
Once you have your cutting board and knife ready to go, start by placing the unskinned fillet on the cutting board with the skin side facing down against the cutting board. You want to ensure your cutting board is stable and will not slide across your counter since you will be handling a sharp knife.
Place the unskinned fish fillet in a position where the tail end is towards your more dominant hand. This will give you better control and precision when handling the fillet as well as handling the knife blade safely. 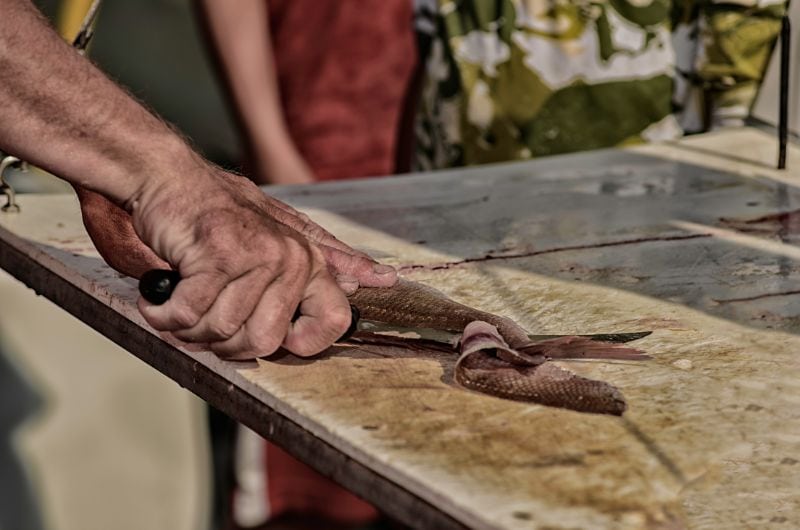 After the fish fillet is positioned for easy handling, start by making a small cut under the fish skin at the end of the fillet near the tail. This is where a flexible and sharp blade comes in very handy since you may need to move around tiny fish bones of the ribs or spine.
You will then start to slide the knife from the tail end of the fillet towards the head in a sawing motion to completely separate the skin layer from the flesh you will be breading or baking.
As you are skinning, don’t be afraid to move the flexible blade around the shape of the fish in order to work around small bones on the skin side. This may especially be noticed along the belly of the fish due to the ribcage.
You may need to make several cuts with the thin blade to fully separate the fish skin from the flesh when you are starting out. This is perfectly fine and as you get more adept at skinning the fish you will eventually be able to remove the skin in a single piece.

While you are cutting the fish, don’t be afraid to stop and remove the knife several times while you reposition the fish fillet or inspect the backside of the flesh. You want to keep the knife positioned against the flesh without slicing into it.
If you are just learning how to remove the skin on a fillet, it may take quite a bit of practice to learn what amount of pressure you can place on the knife in order to get a good clean cut without tearing the flesh underneath.

Once you have the skin separated from the flesh and feel satisfied that you have removed as much of the skin as possible, you can cut the flap of skin off at the base of the tail leaving behind nothing but the pristine flesh fillet.
As your knife work gets better over time with each subsequent fillet, you will reduce the number of nicks and tears in the flesh and the skin. A perfectly skinned fish fillet is great for cooking in a variety of ways, especially when breading or baking the fish.
A little practice can go a long way when removing the skin of your grocery store fillets or self-caught fillets. While there is nothing wrong with grilling a skinned fish, removing the skin is better for fillets that will be breaded, baked, or stewed.