How to get Dents out of Hydro Flask & Other Similar Bottles 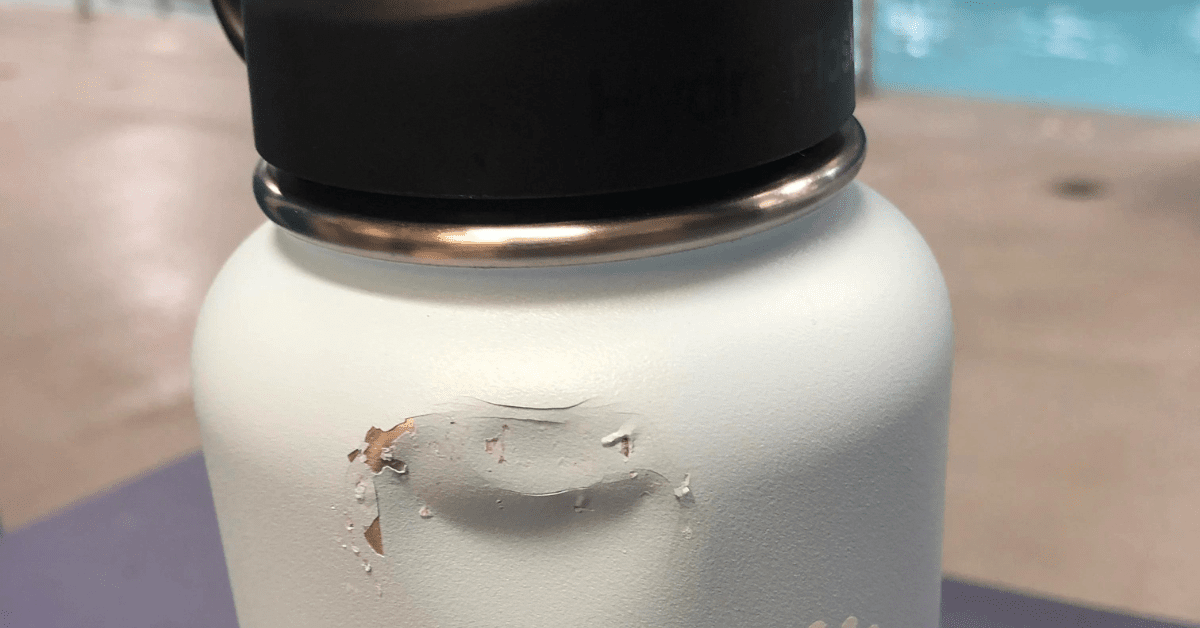 Hydro Flasks aren’t the cheapest pieces of outdoor gear you can buy so you’ll want to take care of yours once you have it.

No matter how careful you are though, sometimes, accidents happen, particularly out in the wild. You might drop your Hydro Flask bottle, you might drop something on it, or it could just take a bit of a beating while on your latest outdoor adventure. Either way, a dent in your hydro flask is not something to be happy about.

In this article, we explore a method of getting dents out of your hydro flasks and other similar bottles. Once you know how to do this, it can massively extend the life of your insulated steel bottles as you can repair any dents yourself rather than having to buy a new one each time it gets slightly dented.

The first step in the process is to heat up the dented area of your Hydro Flask with a hairdryer.
You will only need to heat it until it is warm to the touch so a standard hairdryer is more than suitable for this.

Take a piece of dry ice and rub it over the dented spot that you heated with the hairdryer in the previous step.
You will want to have a towel, gloves, cloth, or something to hold the dry ice with to prevent any burns or damage being caused to your skin.

It can take several cycles of this process to make progress but keep going until the dent starts to improve. Bigger dents will take more cycles!

Step 4: Help The Dent Out With Some Force

You may have to push on the sides of bigger dents to help it pop out.

Does This Technique Always Work?

There are other videos and posts online from people who have tried this method to fix a dent in their Hydro Flask bottles. While many have been successful, there are some people who haven’t been able to remove a dent using this method.

It does seem to be dependent on the location of the dent as to your chances of successfully removing it from your insulated bottle. If the dent is fairly low down and is on a relatively flat part of your metal bottle, then this method has more chance of working. The more curved parts seem to be more of a challenge to repair so this is something to keep in mind when trying this for yourself.

Don’t Try To Push It Out From The Inside

While you might think it makes sense to simply push a dent out from the inside of your Hydro Flask bottle, this won’t actually work.

A hydro flask water bottle has two walls – an inner wall and an outer wall. Between each wall is a vacuum that prevents air from moving between the two areas. If you are trying to push a dent out from the inside of your bottle, all you are doing is pushing against the inner wall of your bottle. Any dents will be in the outer wall so you won’t be able to remove a dent in this way.

Even if you could apply enough pressure to the inside of your hydro flask to push a dent out, you will likely cause damage to one or both of the walls resulting in the loss of the vacuum and your bottle’s insulating capabilities.

Some people online have suggested that you put dry ice inside your dented hydro flask before adding water to make it turn into a gas faster. They say that if you put the lid on your bottle after doing this, the pressure will build up enough to push out any dents.

Doing this can be extremely dangerous. If the pressure inside builds enough, your metal bottle could actually explode and send pieces of metal flying around your house!

Even if your bottle doesn’t explode, you could easily damage the lid or one of the walls so this is not a good way of fixing a dent.

As far as water bottles go, hydro flasks are pretty tough. That being said, they can dent if you drop them or they take a hard knock.

As they are made from stainless steel, they are not necessarily easy to dent, but they certainly can be dented if you aren’t careful.

Accessories To Stop Your Hydro Flask Getting Dented

The Hydro Flask Boot is a silicone cover that simply slides onto the bottom of your water bottle. It comes in a range of colors and is tough enough to protect your bottle from knocks and bumps that could cause dents.

If you want a way of carrying your Hydro Flask and protecting it from dents at the same time, a Hydro Flask Cover/Sling could work very well.

It has an adjustable shoulder strap and is a protective pouch to keep your bottle dent-free.

There are several brands that now make protective slings for insulated bottles. Some of these are cheaper than the Hydro Flask slings so they could be well worth a look.

Other Tips To Keep Your Hydro Flask From Getting Dented

The main way of preventing your hydro flask from getting dented is to be as careful as you can with it. Pack it in your bag with soft items around it, be careful not to drop it, and store it in a place where it won’t get sat on, stepped on, or damaged in any other accidental way.

The Hydro Flask lifetime warranty does not cover dents as these would be considered wear and tear. The warranty will only cover manufacturing defects and a dent does not fall into this category.

Does a dent affect how a Hydro Flask works?

Hydro flasks keep your drinks cold (or hot) because of the vacuum created between the inner and outer walls. As long as the vacuum isn’t compromised, your bottle should perform as expected.

Even seemingly significant dents might not be enough to stop your Hydro Flask from working so, if you don’t mind a slightly beaten up appearance, you might not need to worry too much about any dents in your hydro flask.