Weird Fishing Methods from Around the World 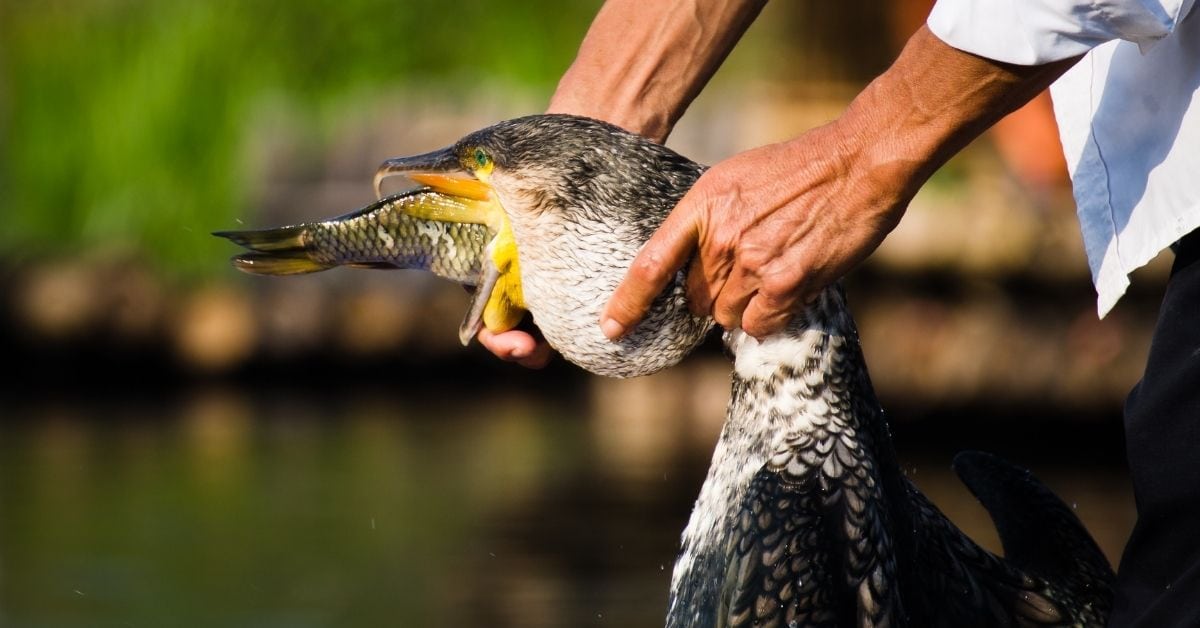 Humans have been fishing for at least 40,000 years. We know this because the remains of a 40,000-year-old modern human were examined and showed that he had regularly consumed freshwater fish.

As us humans can get quite creative (particularly when it comes to our survival and food), there have been some interesting fishing techniques created over the years.

Native Americans came up with noodling as an effective way of catching catfish. The idea sounds simple but you do need quite a bit of bravery to attempt it.

Catfish noodling involves using your finger as your fishing hook and lure. You basically go underwater and wiggle your fingers (like noodles) in front of a nesting catfish. Once they bite onto your lure (your fingers), you hook the catfish by the throat with your hand.

At one point it was something of a tradition in the southern states and along the Mississippi River. Today though, it is illegal in many states due to how destructive it is to catfish populations (as noodling targets nesting catfish, once caught, their eggs are left unprotected and extremely unlikely to produce babies).

Tickling trout dates back to at least the times of William Shakespeare as he mentions it in his play “Twelfth Night”. It was very popular in the UK although it is now illegal there.

This weird fishing method involves finding a trout in the water and tickling its belly. This sends the fish into a trance allowing you to easily reach in the water, pick it up, and take it away with you.

Despite being illegal in the UK, poachers are still known to use this method to illegally catch fish.

Some people say that flounder tramping should be banned as they think it is cruel to the fish, but it is argued that it’s no crueler than regular fishing. Whatever your thoughts on flounder tramping, it is very popular in Scotland with the country even hosting the World Flounder Tramping Championships.

As its name suggests, flounder tramping involves wading in muddy water until you find a flounder, and then you stand on it to catch it. It’s not fancy and it’s not a particularly effective technique but it does work if you can be patient enough to be good at it.

A spear used to be used to catch the fish too, but it was realized that trying to spear a fish under your feet in murky water probably wasn’t such a good idea so that element was removed.

Drone fishing is certainly not an ancient or traditional fishing method. As drones have become more accessible and more popular, they have been used in the fishing world. While some anglers use them for recon – scouting for schools of fish, etc, other anglers actually use them to physically catch the fish too by remotely controlling them from shore.

This weird fishing method is banned in most of Australia and in some US states too. Some places allow anglers to use drones for recon but not for catching fish so it still seems undecided if drone fishing will be around for long or not.

Cormorants are large water birds that Chinese and Japanese fishermen train to catch fish and return them to shore.

It dates back to at least 636 CE which was well over 1000 years ago and involves a loose snare being tied in the bird’s throat. This allows them to swallow small fish but will hold large fish in their throat that the fishermen get their Cormorant to regurgitate upon their return.

Today, Cormorant fishing is barely used and can only be seen in Southwestern China as there are now far more effective modern methods of fishing.

Skarping is an extremely weird fishing method from the US that no one other than its creators can currently do.

It involves wakeboarding and attempting to catch Asian Carp in a handheld net as you speed along the water surface. If you manage to catch one, you dump it through a basketball hoop into a trash can floating in front of you.

If you think it sounds ridiculous – you are 100% correct. That being said, the idea of Skarping came about from issues caused by the invasive Asian Carp. The fish can weigh up to 30 pounds and have a habit of jumping out of the water any time a boat passes them. They have been known to damage equipment, destroy habitats, and injure anglers.

Although catching Asian Carp and reducing their population seems to be a good idea, getting insurance for chartered trips has proven difficult so this form of Skarping isn’t something many people can try right now.

Electrofishing is the fishing method used by scientists to catch fish without causing any long-term harm to them. A direct current is used to stun the fish so they can simply be scooped up and caught. The effects are short-lasting with many fish recovering and returning to normal within a couple of minutes.

While electrofishing is undertaken by scientists and companies around the world, it is currently illegal in a lot of countries for recreational fishing.

Bobbing for Eels involves using balls of worms as a lure. This is usually tied onto some kind of rod.

The ball of worms is placed in the water and when an eel bites into it, the fishermen swing the eel out of the water and onto the shore. No reeling – just swinging!

Using trained otters for fishing dates all the way back to the 6th century. While it has been used all over the world at various points in time, it’s now only really used in Bangladesh.

Trained otters are put into the water and either used to chase fish into nets or they are used to retrieve fish from nets and bring them back to their anglers.

Otters are naturally very good at catching fish so it makes complete sense that we have taken advantage of their natural ability to help keep us fed over the years.

Another weird form of fishing is bow fishing. As the name suggests it involves shooting fish in the water with a bow and arrow. It is really a form of sight fishing, but instead of a rod and reel, you are using a bow. Bow fishing is great for fish that swim close to the surface in relatively clear water. You can learn more here about bow fishing.

Traditional fishing gear can be expensive so coming up with creative ways of catching fish is a great way of keeping costs down while still being able to enjoy your time on the water.

Although some of these fishing methods are illegal, most have started from the need to catch fish in order to survive.

If you enjoy fishing and want to try some of your own weird methods, just be sure to think about the safety, legality, and any effects it might have on the fish being caught.